Kevin McCarthy Says Nobody Questions ‘Legitimacy Of The Presidential Election’, Says He’ll Be House Speaker In 2023 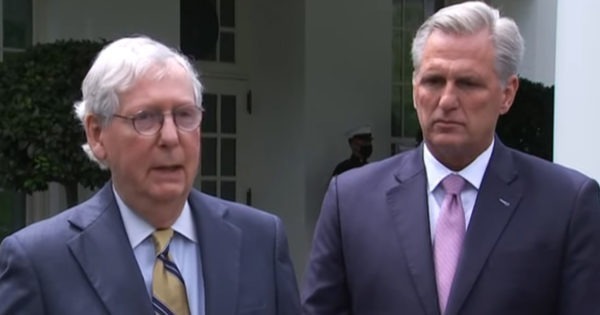 House Minority Leader Kevin McCarthy – who vehemently supported Liz Cheney as House Republican Conference Chair until Tucker Carlson exposed his decision to live with anti-Trump pollster Frank Luntz – claimed that nobody is questioning the integrity of the 2020 election, then asserted that he will be Speaker of the House in 2023, after Republicans take back the lower chamber in the midterm election.

Despite an ongoing audit in Arizona that is fully supported by 45th President Donald Trump, McCarthy asserted, “I don’t think anybody is questioning the legitimacy of the presidential election,” and proceeded to discuss his “productive” meeting with Joe Biden to discuss the Democrats’ bloated infrastructure proposals. Later, McCarthy told reporters that he has no concerns about opposition from President Trump or his supporters, and suggested that he will become House Speaker should the Republicans take back the House of Representatives in the 2022 elections.

The last question McCarthy took from the media was, “Are you concerned about your future in leadership, given you protected Cheney for so long, and missed earlier calls to remove her?” In response, McCarthy declared, “Not at all. I’m looking forward to being Speaker in the next Congress.”

This comes only hours after McCarthy finally heeded calls to remove Cheney from her leadership role in the Republican Party’s house delegation. As National File noted, “House Minority Leader Kevin McCarthy, who repeatedly and vociferously defended Cheney until recently, requested a voice vote to determine the level of support for removing Cheney. This is markedly different from the last time there was a vote on her role in leadership, when McCarthy stuck his neck out to defend Cheney, and the Republicans voted via a secret ballot. Cheney had already voted to impeach President Trump by this time.”

McCarthy’s long time support of Cheney is only one of the potentially damaging stands taken by the politician. On February 3, McCarthy condemned statements made by Rep. Marjorie Taylor Greene. “Past comments from and endorsed by Marjorie Taylor Greene on school shootings, political violence, and anti-Semitic conspiracy theories do not represent the values or beliefs of the House Republican Conference,” declared McCarthy, while refusing to provide any evidence of “anti-Semitic conspiracy theories” promoted by Greene. McCarthy added that her statements caused “deep wounds” and consented to allow Democrats to remove Greene from her committee assignments.