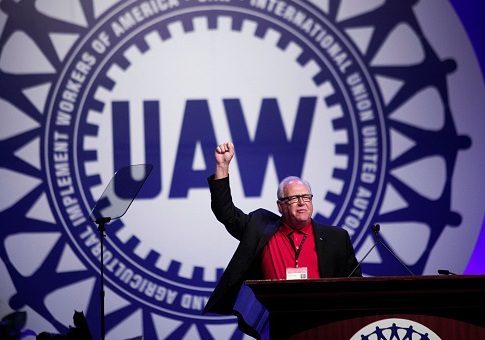 The former president of one of President Joe Biden’s closest union allies is heading to jail in connection to a multimillion-dollar corruption scheme.

Dennis Williams, who served as the president of the international United Auto Workers union for four years, was sentenced to 21 months in prison, the U.S. attorney’s office for the Eastern District of Michigan announced Tuesday. Williams was convicted of conspiring with at least six other union officials to embezzle funds from union members. A federal corruption probe found that Williams had also used union funds to pay for his personal expenses.

“Instead of serving the interests of the hard-working men and women of the UAW, Dennis Williams conspired with senior UAW officials to embezzle over $1 million in union funds,” one of the investigators said in a press release. “We will continue to work with our law enforcement partners to investigate corrupt union officials who betray the union members they are entrusted to represent.”

The UAW pumped nearly $6 million into supporting Democratic causes in 2020. Biden met with the leadership of the union shortly after he won the 2020 election, while the union was under federal investigation. Biden pledged to be in “lockstep” on labor issues with the union during the meeting. The Biden administration did not respond to a request for comment on the sentencing.

In December, the union agreed to pay $1.5 million to resolve the five-year investigation. It also agreed to six years of an independent monitor and pledged to make significant reforms. The current UAW president, Rory Gamble, was not under investigation.

“The union has had a problem with fraud, embezzlement and corruption,” U.S. attorney Matthew Schneider said at the time of the settlement. “There are a few bad apples and those people have been convicted.”

The UAW said it is working to restore the faith of its members in a statement provided to the Washington Free Beacon.