‘YOU WILL BE PRIMARIED’: Texas Republican Confronted By Constituent He Called ‘Trash’ For Trying To Stop Child Sex Changes 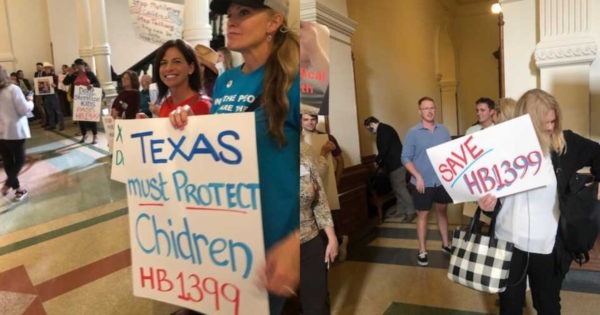 Republican Texas Rep. Jared Patterson was confronted Kevin Whitt, a former transgender woman who found God and now lives as his biological sex, after Patterson called him crazy and “trash” for asking his office to advance HB 1399, which would effectively ban transgender surgeries for minors in Texas.

Whitt confronted Patterson after he insulted him for urging the Texas GOP to put the bill on the calendar by Monday for a full House vote. “Patterson, care to comment on calling your constituents crazy, trashy, and conspiracy theorists?” said Whitt as Patterson attempted to walk away. “You won’t protect children. Care to say anything? Didn’t think so. You will be primaried!”

A constituent confronts GOP Texas Rep. @JaredLPatterson after he refused to put a bill banning transgender surgeries and chemical castration up for a vote.

Patterson previously called his constituent “crazy” and “trash” for lobbying for the bill. pic.twitter.com/OuJup4t1eA

“Jared Patterson is my representative, and he has blocked me from commenting on his Facebook. He deleted all the negative comments on his Facebook about supporting HB 1399 and then, he also called me and my friend Tracy Shannon crazy, conspiracy theorists,” Whitt explained to National File. While Patterson has repeatedly accused Whitt of cursing at his staffers, Whitt, Shannon, and another activist separately denied this to National File.

After Tracy Shannon, an activist urging legislators to schedule and vote for the bill that would prevent life altering transgender treatments for minors in Texas, reported that her “activist was told by [Jared Patterson’s] Chief of Staff that [Rep. Dustin Burrows] and [Rep. Tom Craddick] were killing the bill” and “Other source said Burrows is promised a lobbying job,” instead of addressing the concerns from Shannon, Patterson insulted her, writing, “Get your facts straight crazy person,” and claimed the legislature is having its “most conservative session in history,” reported National File.

Patterson co-authored the bill and then refused to get it on the calendar to be voted on, despite himself being on the Calendar Committee, to the surprise of many who hoped that the Texas GOP would take a stand to end chemical child castration in their state.

“He [Patterson] refused to comment. He refused to comment. He in fact said online that he doesn’t care where anybody lives, if they’re trashy, he’ll call the cops and get them thrown out of his office. He keeps saying that I cussed in his office, I did not,” Whitts told National File. “He’s a liar. He is a RINO. They call themselves a team at Calendar Committee, that they’re all a close team. Well we didn’t hire people to represent us for them to go up there and be team players. They aren’t supposed to be playing on a team. They’re supposed to be playing for their constituents.”

Multiple activists and a former state legislator told National File that the Texas House Calendars Committee’s refusal to assign a date for a floor debate on H.B. 1399, which aimed ban transgender surgeries and chemical castrations for minors in Texas, has essentially killed the bill despite over 91% of voters in a large Texas district supporting it.