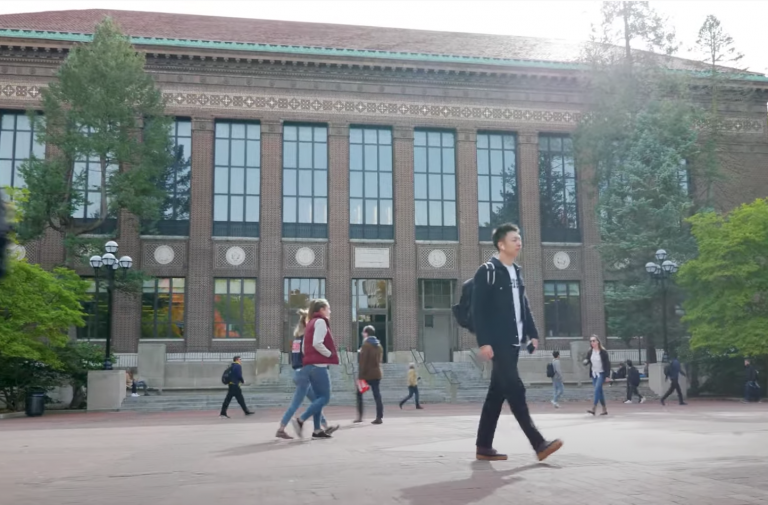 The University of Michigan’s student government condemned the school for its “complicity in Israel’s violence” and capitalized on violent attacks on the Jewish state to advocate the anti-Israel Boycott, Divestment, and Sanctions movement.

In a letter to the school community, Michigan’s Central Student Government called Israel an “apartheid” state and demanded the university divest from Israel-based businesses that profit “off of the settler state’s occupation.” Until it does, the university will remain implicated in Israeli military actions, like the state’s response to ongoing Hamas rocket strikes, the letter claims.

“The actions of the Israeli occupying forces throughout Palestine are inhumane, international war crimes,” the letter reads. “For the past 73 years, this violence has displaced, harmed, and killed indigenous Palestinians. This is not a ‘conflict,’ but emblematic of Israeli settler-colonialism, ethnic cleansing, and apartheid.”

Hundreds of Palestinians in Jerusalem rioted this week to protest Israel’s evictions of Palestinians occupying homes in East Jerusalem. Hamas terrorists based in the Gaza Strip have launched more than 470 rockets into Israel in recent days, killing two Israelis on Tuesday and injuring roughly a dozen others. Israeli counter strikes have killed at least 28 people in Gaza.

The Central Student Government’s letter claims that “anti-Palestinian sentiment” on the University of Michigan’s campus has been on the rise in recent years. The student leaders did not respond to the Washington Free Beacon’s inquiry into alleged anti-Palestinian activity on campus.

Jewish students and other supporters of Israel at the University of Michigan have faced several instances of anti-Semitism in recent years. Pro-Palestinian students built an “apartheid wall” on campus during Rosh Hashanah, the Jewish New Year, in 2016. The university’s ethics committee launched its first-ever investigation against a Jewish student, Jesse Arm, after he argued with the students responsible for creating the display.

Anti-Semitism extended to the classroom. One student who wanted to study in Israel was denied a letter of recommendation from a professor who said several academic departments “[pledge] an academic boycott against Israel,” according to Jewish News. A lecturer at a required presentation for university art students compared Adolf Hitler to Israeli prime minister Benjamin Netanyahu and said both were “guilty of genocide.”

“Every time Hamas launches rockets into civilian neighborhoods it delegitimizes its standing even further,” Huizenga told the Free Beacon. “To see the student government embrace the radical BDS movement is disappointing but not surprising. If only the student government would stand up for the free speech of conservative voices on campus with the same vigor that it does with issuing radical statements.”

“The BDS movement needs to be condemned whether at a college campus like the University of Michigan, or in Congress,” Rep. Tim Walberg (R., Mich.) said. “Advocates of the movement knowingly seek to delegitimize and isolate Israel, and we must reject these vile attempts to boycott the Jewish State and undermine America’s longstanding relationship with our close ally.”

A University of Michigan spokesman told the Free Beacon that the university has a “longstanding” free speech policy and that the Central Student Government does not speak on behalf of the school.

The University of Michigan’s chapter of Young Americans for Freedom said on Tuesday that they fear the student government’s statement could encourage anti-Semitism on campus and that it was “disturbing” for such a prominent student group to back the anti-Israel Boycott, Divestment, and Sanctions movement.

The University of Michigan’s Diversity, Equity, and Inclusion Office did not respond to a request for comment about whether the student government’s resolution may alienate Jews on campus.

Neither of Michigan’s Democratic senators, Gary Peters and Debbie Stabenow, returned a request for comment. Reps. Debbie Dingell (D.), who represents Ann Arbor, and Rashida Tlaib (D.), two vocal anti-Israel members from Michigan, did not respond to requests for comment.

Tensions between Israel and Palestinians heightened this week as the Israeli government began evicting Palestinians from their homes in East Jerusalem. A fall court order found that several families in the Sheikh Jarrah neighborhood failed to pay rent for years and found no evidence that Palestinians had legal ownership of the properties prior to the war of 1967.