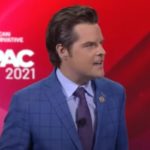 “Hell hath no fury like a woman scorned.” Although William Congreve wrote an extended version of the line in 1697, according to Oxford Reference, it still holds true today. Federal agents have been investigating Representative Matt Gaetz (R-FL), and they have an old girlfriend of the congressman in their crosshairs. Neither she nor one of the congressman’s friends, turned FBI informant, have good things to say about one of Donald Trump’s most enthusiastic fixers. And it appears that Gaetz is in a really big fix.

When Trump’s former fixer/attorney Michael Cohen testified before Congress, our ex-POTUS sent Gaetz over to stand in the hearing room just within Cohen’s peripheral vision. Why? The ex-president sent him over to intimidate the attorney, and as a reminder that Trump was watching, CNN reported:

‘[Gaetz is facing] federal sex trafficking, prostitution and public corruption laws and whether he had sex with a minor, has been ongoing for months.’

It appears that investigators may have a second witness to testify against Gaetz in addition to the former Florida county tax collector Joel Greenberg. The former friend has a deadline to make a plea agreement and cooperate with the feds by this week’s end or face “33 charges…including sex trafficking a minor.”

The Gaetz case is under the “public integrity section of the Justice Department.” The Department of Justice (DOJ) is currently considering whether it has ” sufficient evidence for an indictment.”

A Gaetz ex-girlfriend may be one of the government’s key witnesses, along with Greenberg:

‘The ex-girlfriend could also be questioned by investigators about a second woman as they try to determine whether Gaetz may have slept with that woman when she was only 17.’

His former girlfriend did not work in his Congressional office, but she did go on a trip with him to the Bahamas in 2018. At that time, she apparently knew about the “drug use and arrangements with women.”

In 2017, the girlfriend interned for a Republican legislator, but she was fired when he discovered she was a Democrat. Gaetz contacted Congressman Darren Soto (D-FL) and asked him to hire her as an unpaid intern.

Soto (D-FL) released a statement indicating that he did, indeed, hire the intern in 2017:

‘She was just an intern. I found it offensive that she was fired for her political beliefs.’

Gaetz has denied all charges against him. He is attempting a Donald Trump, but he would be the first to succeed. The congressman’s spokesperson told CNN:

‘Your “story” is simply a regurgitation of the same falsehoods you’ve been peddling for two months now without a shred of evidence or a single on-record accuser.’

Federal investigators are looking into whether women were paid to travel for sex and possibly in exchange for drugs with Gaetz. The FBI noted that his girlfriend also benefitted financially.

The Politico originally reported that she was part of the investigation into Gaetz. Greenberg started negotiating with the FBI last year. Politico discovered the women on the trip were “given cash or gifts for sex.”