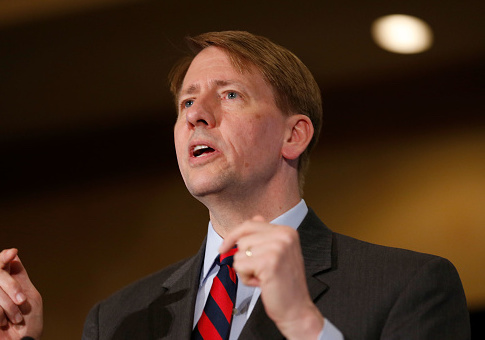 The incoming head of the federal student loan office is a former top dog at the Consumer Financial Protection Bureau whose tenure there was marked by allegations of racism and sexism.

The Biden administration tapped Richard Cordray last week to serve as chief operating officer of the Education Department’s Office of Federal Student Aid, where he will oversee the country’s ballooning $1.7 trillion federal student loan portfolio. According to a former CFPB employee and outside investigator, Cordray and other bureau leaders perpetuated a culture of discrimination and intimidation at the CFPB.

Cordray’s past leadership could pose a problem for the Biden administration as it attempts to recast student loans as a racial justice issue. Black Americans have on average $25,000 more in student loans than their white peers four years after graduation, studies have shown. Minority borrowers are also more likely to fall behind on repaying their loans. The administration has discussed eliminating $10,000 in student loan debt per borrower in an attempt to achieve racial equity.

Former CFPB general counsel Angela Martin accused Cordray at a House subcommittee hearing of encouraging a discriminatory work environment, Politico reported. The hearing followed a damning report from the American Banker that found that bureau management had a “pattern” of giving white employees higher marks than their black peers on performance evaluations.

Martin testified at the hearing that the CFPB’s consumer response division, which at the time was staffed mostly by African Americans, was often internally referred to as “the plantation” or “cesspool.” Black employees working there told Martin it was “extremely hard” to leave the division.

One employee who had immigrated to the United States told Martin that managers called him an “f—ing foreigner” in a meeting. A disabled man was punished with low evaluation marks after the bureau refused to accommodate for his disability, violating the Rehabilitation Act. The agency was forced to admit it discriminated against the employee after he spoke out.

Cordray allegedly asked Martin to have her lawyers back off after she filed a discrimination complaint through the Equal Employment Opportunity office, as he claimed he was trying to get her a job in the CFPB’s enforcement division. Martin said she settled the complaint but did not receive the job.

Following the American Banker report, a Government Accountability Office survey in 2016 found that roughly a quarter of the CFPB’s female and minority employees said they faced discrimination in the workplace.

Cordray, who took the helm of the CFPB in 2012 as a recess appointment, also faced scrutiny for his financial decisions. Cordray won the “Porker of the Month” award from Citizens Against Government Waste, a watchdog group, after he commissioned a $216 million, taxpayer-funded facelift for the CFPB’s office. The CFPB leased additional temporary offices for $22.3 million from Neil Bluhm, a longtime friend and campaign fundraiser for President Barack Obama.

“It is critical that students and student loan borrowers can depend on the Department of Education for help paying for college, support in repaying loans, and strong oversight of postsecondary institutions,” Cardona said. “Cordray has a strong track record as a dedicated public servant who can tackle big challenges and get results.”

The Education Department did not respond to the Washington Free Beacon’s request for comment in time for publication.

The CFPB under Cordray allegedly falsified documents in order to fine a Texas-based payday lending company that the bureau accused of pushing borrowers “into a cycle of debt.”

Former CFPB employee Cassandra Jackson said she was ousted after refusing to alter the documents. Jackson sent a letter to former attorney general Jeff Sessions asking for the Justice Department to investigate the matter, in which she accused higher-ups of “widespread racism and gender discrimination.”

After the case agains the Texas company was settled, Cordray sent a bureau-wide email giving “kudos” to the CFPB employees who handled the case.

Cordray, a former Ohio attorney general, stepped down from his role at CFPB in 2017 to launch an unsuccessful gubernatorial campaign.

Cordray is not the first Education Department pick to face allegations of intimidation. Four women claimed in a lawsuit that Cindy Marten, Biden’s pick for deputy secretary of education, bullied them and ignored their complaints of sexual harassment against a teacher while she was the superintendent of the San Diego Unified School District.