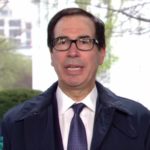 CThe government watchdog group known as Citizens for Responsibility and Ethics in Washington (CREW) has kickstarted an investigation of ex-Trump official Steven Mnuchin, who served as Treasury Secretary throughout the majority of the Trump administration. He could have been using his official federal position in preparation for financial pursuits that he was setting up for himself after the end of his government service.

CREW explains in a new public statement that they are investigating whether Mnuchin’s low-key removal of sanctions against Israeli billionaire Daniel Gertler towards the end of Trump’s term was connected to “Mnuchin’s post-administration pursuits,” as the watchdog organization puts it. Mnuchin harbored “post-administration plans to establish an investment fund seeking investments from sovereign wealth funds in the Middle East,” which “raised questions about his extensive travel to the Middle East while in office,” CREW notes.

CREW notes that it’s “not certain” that Mnuchin “will seek funds from countries he routinely visited or from people like Gertler,” but nevertheless, it’s an open question, and the chance isn’t zero. He could have been cultivating ties that might prove financially beneficial to him in this post-Trump era.

Now, CREW has filed a lawsuit against the State and Treasury Departments, demanding records that “would reveal more details” about Mnuchin’s decision to lift the sanctions against Gertler, the organization says. CREW has filed their lawsuit after a previous request under the Freedom of Information Act (FOIA) for the records went without a response, the group explains. Mnuchin himself had originally imposed the sanctions against Gertler over what CREW describes as “extensive corruption tied to human rights violations in the Democratic Republic of Congo.” Although the sanctions were temporarily removed, the Biden administration re-imposed the measures once taking power.

CREW has also filed a similarly styled lawsuit against federal authorities seeking records relating to interactions between Trump era Attorney General Bill Barr and Erik Prince, a Republican Party donor and co-founder of a military contractors company originally known as Blackwater. CREW suspects that Trump allies at the Justice Department may have provided preferential treatment to Prince by letting him evade serious scrutiny for lying to Congress and for potentially violating U.S. export laws.