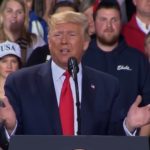 As Republican infighting over the future of the party continues to roll on, Maryland GOP Governor Larry Hogan went on NBC’s Meet the Press over the weekend and criticized the fact that expressing loyalty to “Dear Leader” Trump is proving necessary for those seeking to remain welcomed in the Republican Party. “Dear Leader” is a title for the late North Korean leader Kim Jong-il, and applying it to Trump reflects the observation that he has been presiding over and demanding cult-like allegiance like that which would be found in a dictatorship.

Hogan commented in part as follows:

‘It just bothers me that you have to swear fealty to the ‘Dear Leader’ or you get kicked out the party. It just doesn’t make any sense… It’s sort of a circular firing squad where we’re just attacking members of our own party instead of focusing on solving problems.’

“It just bothers me that you have to swear fealty to the ‘Dear Leader’ or you get kicked out the party.” pic.twitter.com/gMVMf09Svu

Among other examples of the issue under discussion by Hogan, Rep. Liz Cheney (R-Wyo.) has refused to go along with the lies from Trump about the integrity of the 2020 presidential election, and she is now facing the potential imminent end of her time as a leader among House Republicans. She appears to be getting set up to be replaced as House GOP conference chair by Rep. Elise Stefanik (R-N.Y.), a Trump loyalist. Other Republicans who have expressed even the slightest opposition to Trump, no matter the underlying facts at hand, have also faced swift criticism from within the party.

During his time on NBC, Hogan was also critical of the lies that Trump has pushed about the 2020 presidential election, which the former president has falsely claimed was plagued with fraud and thereby swung to Biden.

As Hogan put it:

Although there’s nothing on par with Trump’s election lies among Democrats, even a passing acknowledgement that the claims are “crazy” is more than the majority of prominent Republican leaders are willing to offer.

Gov. Larry Hogan (R-Md.) talks to Chuck Todd about former President Trump’s lies about the 2020 election, during an exclusive interview with Meet the Press.https://t.co/p2WIco9d62 pic.twitter.com/GKQIgyrdoX