Artur Pawlowski Dragged Away by Calgary SWAT Police After Church

May 9, 2021 Constitutional Nobody News 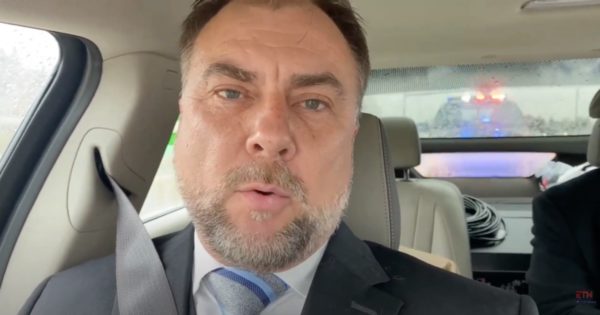 Video footage shows Pastor Artur Pawlowski arrested in the middle of the road and dragged into police vehicles on Saturday.

Artur and another pastor were stopped by police while heading home from conducting a church service, which has officially been made illegal in Canada. According to a recent statement made by the Calgary Police Service the police are granted permissions to arrest an individual for “organizing, promoting and attending and public gathering where public health orders are not being followed.

Ezra Levant, a reporter from Rebel News, shared a tweet shortly after the arrest of Pawlowski.

“A heavily-armed SWAT team just took down a Christian pastor heading home from church. Police say he’s charged with “inciting” people to go to church. This is the second pastor jailed this year.”

At the time of publication, National File was unable to determine how long Pawlowski is expected to remain in Police custody. In an interview conducted by National File, Pawlowski spoke of possible future police interactions including the permissions granted by the courts to arrest Pawlowski and any associates without the use of a warrant.

“The Respondent, Artur Pawlowski, together with any other person at the property shall grant access to any Executive Officer in order for him or her to attend at the Property without notice, during the hours of 8:00 a.m. to 8:00 p.m., to allow the Executive Officer to exercise his or her powers under section 59 of the Act.”

Pawlowski’s arrest correlates to a rise in anti-Christian incidents globally. Although Pawlowski and his family were promised a home in Canada that would be free of religious persecution, this will be another in a long line of incetances where Pawlowski standing up fro his rights as a clergy man would result in arrest.”You cannot cancel God,” Pawlowski told National File.

The Warriors for Christ have been authorized to take up donations on behalf of Pawlowski, and Rebel News is also assisting with legal expenses

Click this link for the original source of this article.
Author: Kim Coulter