WATCH: Hollywood Elites Abandon Support for Trans Woman When She Runs as a Republican 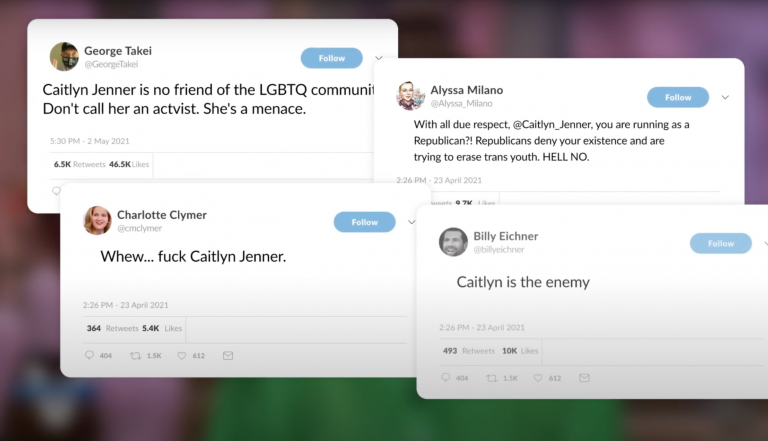 In 2015, when former Olympic gold medalist Bruce Jenner announced his transition to becoming Caitlyn Jenner, Hollywood’s liberal elites and LGBTQ activists flooded social media with an outpouring of endless praise for Jenner’s courage and bravery. ESPN presented her with the Arthur Ashe Courage Award and said her story helps “make our country a better place to live and a better model for the world.”

In April, Jenner announced she would run as a Republican to challenge Gov. Gavin Newsom (D.) in California’s recall election this year, and Hollywood’s support for the prominent transgender figure lacked the same level of enthusiasm seen in 2015. Longtime LGBTQ activist and actor George Takei called Jenner a “menace” and “no friend of the LGBTQ community,” and comedian and actor Billy Eichner said, “Caitlyn is the enemy.”

The post WATCH: Hollywood Elites Abandon Support for Trans Woman When She Runs as a Republican appeared first on Washington Free Beacon.