Biden’s SecDef Says ‘We Don’t Have A Plan’ for Avoiding Chinese Rocket, Hopes It ‘Lands in the Ocean or Someplace Like That’ 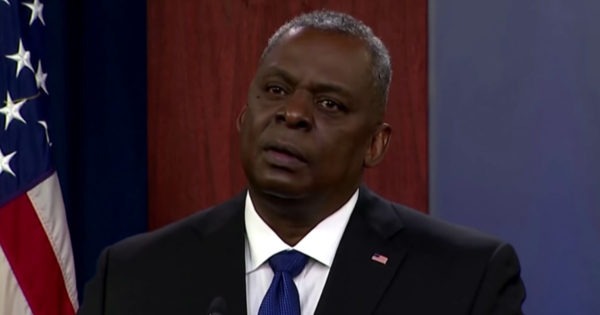 Lloyd Austin, the Secretary of Defense under the Biden administration, admitted this week that the regime has zero plan in place for shooting down the debris of a giant Chinese rocket booster if it poses a danger to American citizens, and indicated that the administration’s response to the potential national security threat consists of being “hopeful that it will land in a place where it won’t harm anyone.”

“What is the latest estimate of when and where this Chinese rocket will come down, do you consider it a potential threat to the U.S., and do you have a plan for shooting it down if necessary?” Austin was asked on Thursday.

The former Raytheon employee replied, “The latest estimates that I’ve seen is somewhere between the 8th and 9th, uh, and the experts are still working on that, uh, at this point we don’t have a plan to shoot the rocket down, we’re hopeful that it will land in a place where it won’t, uh, won’t harm anyone, hopefully in the ocean or someplace like that.”

BREAKING: U.S. Defense Sec. Lloyd Austin says there’s no plan to shoot down remnants of a large Chinese rocket expected to plunge back through the atmosphere this weekend – Reuters

“We’re hopeful that it will land in a place where it won’t harm anyone.” pic.twitter.com/0DcoZz9Mdj

The 23-ton rocket booster for the Chinese Long March 5B is expected to come hurtling back through the earth’s atmosphere on Saturday. At the size of a skyscraper building, the rocket is the largest object to enter freefall into the Earth’s atmosphere in decades.

Under Austin’s tenure, President Joe Biden has indicated that the U.S. military will focus on gender inclusion and fashioning “maternity flight suits” for the foreseeable future:

President Joe Biden stated Monday that under his administration’s the top priorities of the U.S. military will be tailoring uniforms and body armor so that it fits female soldiers better, as well as changing hairstyle requirements and issuing something called “maternity flight suits.”

“Some of it’s relatively, uh, straightforward work,” Biden said. “We’re making good progress designing body armor that fits women properly, tailoring combat uniforms for women, creating maternity flight suits, updating their hairstyle requirements, and some of it is going to take an, uh, you know, an-an-an an intensity of purpose and mission to really change the culture and habits that cause to leave the military.”

Biden went on to forget the name of his Secretary of Defense, former Raytheon board member Lloyd Austin.

“I want to thank Sec – the former general, I keep calling him general, my, my uh, the guy who runs that outfit over there. I want to make sure we thank the Secretary,” Biden said, thanking Austin for his work in implementing “maternity flight suits.”