May 6, 2021 Constitutional Nobody Education 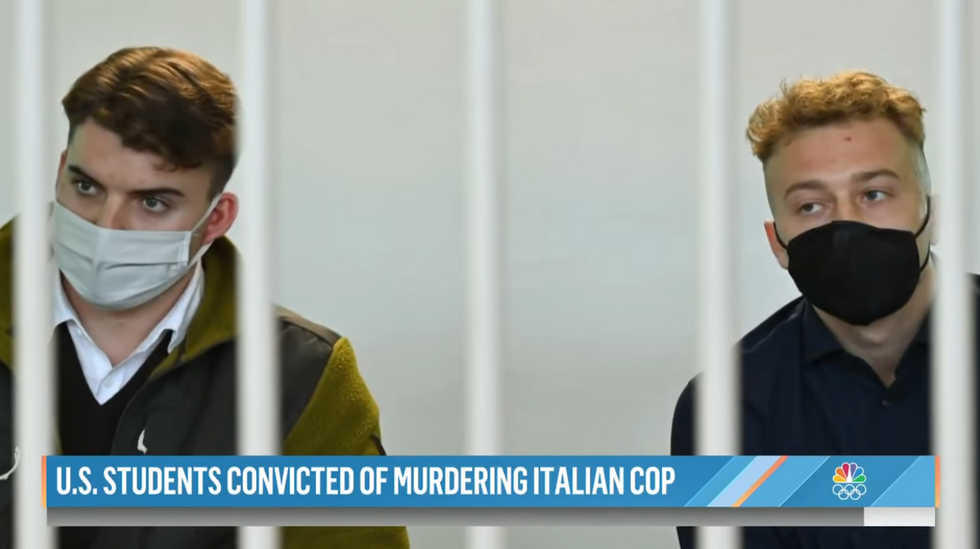 A jury in Rome, Italy, on Wednesday pronounced two American men guilty on all counts for their role in the gruesome murder of a plainclothes Italian police officer, sentencing them to life in prison, the country’s harshest punishment.

Finnegan Lee Elder, now 21, and Gabriel Natale-Hjorth, now 20, former classmates of each other from the San Francisco area, were teenagers when the incident occurred in July 2019, the New York Times reported.

The two were vacationing in Rome when they allegedly got into a fight on an empty street corner with two plainclothes officers, Brigadier Cerciello Rega and Andrea Varriale. The officers were responding to a small-time drug deal gone bad involving the two Americans when they approached and were subsequently attacked.

According to the Associated Press, prosecutors alleged that Elder fatally stabbed 36-year-old Rega 11 times with a knife he had brought with him on his trip to Europe and that Natale-Hjorth proceeded to help him hide the weapon in their hotel room, located nearby.

The defense maintained that the two American teenagers were acting in self-defense during the scuffle, believing the officers to be thugs. They had allegedly attempted to buy cocaine earlier that night, but when the deal was aborted, they stole a backpack supposedly belonging to the individual who brokered the deal.

But in the end, the prosecution was able to persuade the jury that the two defendants acted with “homicidal intent.”

In all, Elder and Natale-Hjorth were charged with homicide, attempted extortion, resisting a public official, carrying an attack-style knife without just cause, and assault. The AP noted that under Italian law, an accomplice in an alleged murder can be charged with murder, as well, despite not materially carrying out the attack.

News of the attack shocked Italy in 2019, as Rega, a newlywed, was a member of the celebrated Carabinieri paramilitary police corps and was given a hero’s funeral.

“His integrity was defended,” his widow, Rosa Maria Esilio, said outside the courtroom after the verdict was read. “He was everyone’s son, everyone’s Carabiniere. He was a marvelous husband, he was a marvelous man, a servant of the state who deserves respect and honor.”

As the defendants were led out of the courtroom in handcuffs, Elder’s father reportedly called out, “Finnegan, I love you.”

The AP reported that one of Elder’s Italian lawyers, Renato Borzone, called the verdict “a disgrace for Italy,” while a lawyer for Natale-Hjorth, Fabio Alonzi, recalled that his client was “completely shocked, he kept telling me he did not understand.”

During the trial, the defendants alleged that at no point during the altercation did the two officers, wearing casual clothing, announce that they were members of the police. Rega’s partner, Varriale, claimed that they clearly announced their identities and displayed their badges.

The two Americans now face at least 21 years in Italian prison before they qualify for parole. Their lawyers have promised to appeal the verdict.

In other news...
Poll Shows Voters Don’t Care About ‘Tory Sleaze’
“Direct Attack on the First Amendment”: Trump DOJ S...
What the Fed Doesn’t Want You to Know About Inflati...
The US Coast Guard Is Taking a Frontline Role on th...
Gingrich: Gap 'widening' between Biden administrati...
Fighter Pilot deserves Medal of Honor distinction, ...
0 Comments
Inline Feedbacks
View all comments