The Future of the American Populist Movement, Part 1: The Truth About Trump’s Standing Within his Own Party 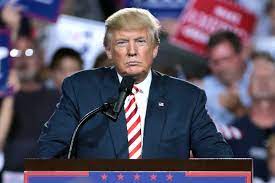 As millions of Americans swarm around the former president in faithful support, we cannot forget the reason why Donald Trump was elected president in the first place. As Tucker Carlson put it: “Trump’s election wasn’t about Trump. It was a throbbing middle finger in the face of America’s ruling class… Happy countries don’t elect Donald Trump president. Desperate ones do.” We must not forget that the personality cult formed around the former president does not eclipse the fact that Donald Trump was elected because he promised change. This change however, was different than president Obama’s “hope and change.” Donald Trump was not Obama; he was not a career politician. Instead, he was a business outsider with no experience in politics whatsoever. If anyone could change Washington, it would be Donald Trump.

Or so we thought.

Failure to Repeal and Replace Obamacare and Lower Premiums: Despite repealing small parts of the Affordable Care Act, much of Obamacare is still in law and premiums for many middle class workers have not gone down.

Failure to Handle the National Debt Crisis: During his first campaign trail, Trump attacked Obama for adding around $10 trillion to the national debt under his presidency (effectively doubling it). He promised that after 8 years of his administration, he would pay off the entire national debt. Ironically, in the four years he was president, Trump added close to the same amount of debt Obama added in his 8 years of the presidency. Many credit Trump for a revival of the US economy, but due to the fact that this revival relied on massive amounts of borrowing, it is almost certain that the revival was only short term (enough to help his reelection bid).

Failure to Implement Meaningful Tax Reform: Despite passing into law a new tax code, the president failed to make the changes he promised. If you were to read the tax plan he outlined in his book, “Great Again,” you would see that the tax code that was actually put in place is completely different from the one promised. First, he promised to reduce taxes significantly for the middle class while forcing the rich to pay more by eliminating loopholes. As you well know, close to 80% of the tax cuts ended up going to the same corporations that have been supporting his opponents. Only 20% went to the middle class. He also promised to simplify the tax code by bringing it down to five brackets. The new tax code kept it at seven. Whether you support the new tax code or not, there is no doubt that it was a significant deviation from the one promised. Trump’s actions with regard to taxes were more similar to a neo-con than a populist. Consequentially, the top 1% continued to get richer faster than the middle class under his administration.

Failure to Handle the Opioid Crisis: One of Trump’s main promises was to solve the opioid crisis. Despite passing legislation intended on helping the situation, opioid deaths continued to grow under his administration

Failure to Lower Tuition Costs: Despite promising to “push colleges to cut the skyrocketing cost of tuition,” tuitions did not decrease under his administration. In fact, they increased.

Failure to Repeal Common Core: Although common core is disappearing from many states, this cannot be credited to the Trump Administration due to the action coming from individual states rather than the federal government.

The above is just a handful of Trump’s broken promises. But to be fair, the former president did have his share of accomplishments. This included loosening regulations on small business, defeating ISIS, and withdrawing troops from Germany. Every president has at least a small share of accomplishments, and you can even make the case that Trump did accomplish more than the average president. However, it is still very clear that Trump failed to enact many of his major promises, and because of that it is difficult to still classify him as the candidate of change.

Many of the former president’s supporters would make the case that Trump’s failure to enact meaningful change is to blame on the Republican establishment, not the former president himself. This may be true, however Trump himself has made no effort to unseat the establishment. Even after Senate Majority Leader Mitch McConnell essentially called him a criminal, Trump has only made an effort to unseat the small group of Republicans who supported his impeachment. I think it is safe to say that unseating three senators that are up for reelection in 2022 who voted to impeach the former president will not have any meaningful impact on Republican leadership.

This leaves the president vulnerable to a primary challenger in 2024. Right now, the narrative that Trump failed to enact meaningful change has been hidden by the right-wing media and many of the former president’s own supporters. All it takes is one high-key primary challenger to bring up this narrative for the former president to become vulnerable within his own party. This challenger would have to share Trump’s enthusiastic personality, his charisma, and his tough demeanor. As stated earlier, Donald Trump wasn’t elected because he was Donald Trump; Donald Trump was elected because he was an outsider. If another man can expose Trump for no longer behaving as an outsider, and convince the public that he himself is the true candidate of change, Trump is in very deep trouble if he were to seek the presidency again in 2024.

Part Two will address who this challenger may be.

Click this link for the original source of this article.
Author: Malcolm Harris

In other news...
The Battle Between Erdogan’s Turkey and Sisi’s Egyp...
“China Is Not a Cow” — Beijing’s Ambassador to Aust...
Rep. Liz Cheney Underwater with Approval at Only 29...
Gov. DeSantis signs election bill live on 'Fox &amp...
How Coronatarians Caused Lumber Prices to Skyrocket
HAWLEY: Why is DOJ inserting itself into the Arizon...
0 Comments
Inline Feedbacks
View all comments