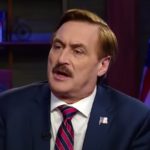 Vimeo, a platform for sharing video content on par with YouTube, has kicked MyPillow founder and CEO Mike Lindell off its site. Lindell has distinguished himself in the months since last year’s presidential election as a prominent spreader of the lie that the election was somehow rigged for Biden, and to this day, he has yet to waver in his public commitment to the idea that evidence for the vast imaginary election fraud that supposedly swung the election to Biden is just around the metaphorical corner. No credible evidence for his election claims has ever emerged.

Lindell shared an image of a message he received from Vimeo with The Daily Beast. On Wednesday afternoon, the company said that his “account was terminated for violating Vimeo’s Terms of Service… and Community Guidelines.” Specifically, Vimeo noted that they “do not allow accounts that upload content created by or mainly featuring a banned user,” and the company described the “purpose” of Lindell’s account as “to promote content from a banned user.”

Separately, Vimeo announced earlier this year that it was “updating its content moderation guidelines to explicitly ban content containing false or misleading information about voting and U.S. election results — including claims that the 2020 presidential election was stolen, fraudulent, or otherwise illegitimate.” In other words, Lindell’s commitment to pro-Trump lies about the election certainly doesn’t appear to have exactly helped his standing at Vimeo. Lindell claimed that the Vimeo account removal “is worse than what Twitter did to me and my company!” because, he said, Vimeo’s account termination “affects my business, the Lindell Recovery Network, and the entrepreneurs who I work with.”

Lindell is currently facing a $1.3 billion defamation lawsuit from the voting technology company known as Dominion Voting Systems, which was a subject of a slew of pro-Trump conspiracy theories about the election. Trump and a number of his allies like Lindell claimed that Dominion was involved in the imaginary election rigging that they have insisted was responsible for Biden’s win, but there is no supporting evidence for this idea. Lindell has claimed that he was “ready the first day” for litigation from Dominion because, he says, he has evidence to prove their corruption. It’s been months without anything remotely credible emerging, however.