May 6, 2021 Constitutional Nobody News 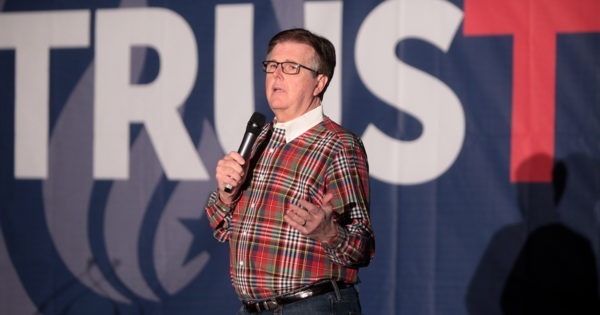 Texas seems to be inching closer to passing Constitutional Carry in the state, an increasingly common law that allows Americans to own firearms without permission from the government. However, Texas Gun Rights, the Second Amendment activist group championing the bill, says Lt. Gov. Dan Patrick has added a “poison pill” to the Senate version of the bill in a last minute bid to kill the legislation and prevent it from reaching Governor Greg Abbott’s desk.

At least two Texas legislators have expressed concerns that Patrick added amendments to the Senate version of the bill that would legally force the Texas House to reject it, stalling Constitutional Carry legislation for the next two years. On Facebook, Rep. Matt Schaefer wrote, “No celebration yet folks! We are now reviewing amendments that were added by the Senate to look for issues that would break House rules governing the purpose of HB 1927. Our first impression has us very concerned. Will share more as soon as we can. Our goal is to make Texas the 21st Constitutional Carry state.”

Separately, former Rep. Matt Rinaldi added, “So Dan Patrick’s plan to kill constitutional carry is to attach a non-germane amendment that will rende rit out of order in the House and blame [Texas House Speaker] Dade Phelan when he sustains the point of order.”

So @DanPatrick’s plan to kill constitutional carry is to attach a non-germane amendment that will render it out of order in the House & blame @DadePhelan when he sustains the point of order. Cc: @DLoesch.

Speaking to National File, Matt McNutt of TX Gun Rights said, “In spite of his recent back pedaling, Lt. Gov. Patrick has been no friend to gun owners in the state of Texas. From threats of Universal Gun Registration to actively opposing open carry in 2015 and opposing Constitutional Carry every year since, Lt. Gov. Patrick has been a thorn in the side of law-abiding Texans wishing to defend their families without a government permission slip.”

“Now, it looks like Patrick may have successfully placed a poison pill in an amendment to Constitutional Carry, in hopes it would cause the House to kill the bill by a point of order. This will not be accepted or tolerated. Speaker Phelan and Lt.Gov. Patrick must get HB 1927 to Governor Abbott’s desk immediately. No stall tactics or procedural delays,” McNutt added.

McNutt and TX Gun Rights provided the Texas legislature with 118,000 petitions for Constitutional Carry to be passed in the state, jump starting the legislative process that led to the Texas House to pass its version of the bill. Patrick, who has reliably stopped pro-Second Amendment legislation during his political career in Texas, was instrumental in crafting the Senate’s version of the bill.

In other news...
Mass Death of Birds and Fish: Is There a Cover Up?
GOP Congressman Kinzinger Comes Out In Support Of L...
Florida UFO Footage Stuns Nation, Coinciding with R...
Legal Case Filed Against 5G for Breaches in Human R...
Hero officer credited with saving the life of partn...
Museum of the Southern Jewish Experience Set to Ope...
0 Comments
Inline Feedbacks
View all comments