Smart TVs: Just One More Way to Snoop on Citizens

May 4, 2021 Constitutional Nobody Featured

Smart TVs are like your smart phone or digital assistant: they’re lots of fun to have, but they provide a treasure trove of your information to data harvesters. Chinese consumers who own Skyworth smart TVs just learned that a private company has been using their units to spy on them. Moreover, their units were sharing information without their consent.

However, the truth emerged when a tech enthusiast in China noticed that his Skyworth TV had become slow. So the user analyzed the code of back-end programs to find a program that had been scanning their WiFi every ten minutes. The program then sent data such as device names, IP addresses, and even other WiFe networks in range to the Gozen Firm in Beijing.

The alert Chinese user wrote on the online forum V2EX:

“What smart devices are used at home; whether your phone is at home; who is visiting and using your Wi-Fi; what’s the name of your neighbor’s Wi-Fi; all of these are constantly being collected and uploaded.”

Other users of smart TVs expressed their anger on other forums:

“Isn’t this already the criminal offence of spying on people? Whom will the collected data be sold to, and who is the end user of this data?”

Caught red-handed, both Skyworth and Gozen responded. Skyworth issued a statement claiming that it had ended its “cooperation” with Gozen, with whom they had been working since 2014. Then, on the same day, Gozen apologized to consumers. However, they also stated that users could have disabled the Gozen Data Android app. That is, provided they knew how to accomplish it.

You may be thankful that you’re not the Chinese owner of a Skyworth TV. But guess what — Skyworth sells these smart TVs in the US. In fact, here’s a YouTube video January showing owners how to set one up. I cringed when I watched it.

Okay, so maybe you don’t have a Skyworth smart TV. But don’t breathe a sigh of relief just yet, because the Biden administration wants to do their own snooping on your devices — without getting a warrant, either. What’s more, they’re looking at private firms to do their dirty work.

However, using private firms could be a convenient workaround to the feds who want to dig into Americans’ communications. But don’t worry — they’re following the Constitution, says the DHS:

“All of our work to address the threat of domestic terrorism is done consistent with the Constitution and other applicable law, and in close coordination with our privacy and civil liberties experts.”

Besides, they’re only going to surveil extremist groups. Like Antifa, maybe? No, they’re going to snoop into the private messaging of groups like the Proud Boys or the Boogaloo Boys. It’s all about that February 6 “insurrection” at the Capitol, where only one person was killed, and not by one of the rioters, either. 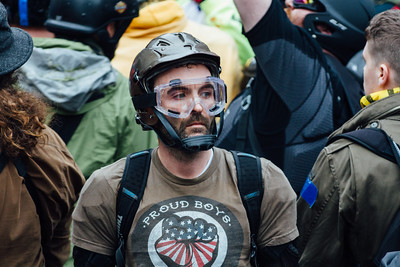 But those Proud Boys and Boogaloo Boys are slippery characters. As one DHS official said:

“Domestic violent extremists are really adaptive and innovative. We see them not only moving to encrypted platforms, but obviously couching their language so they don’t trigger any kind of red flag on any platforms.”

Not a member of one of those groups? Don’t rest easy on that, either. The US government has been purchasing smart data for a while now, says Tim Sandle at Digital Journal. They’re also selling it to third parties, much like Gozen used Skyworth smart TVs to obtain user data. And one of those parties is the US government, which has been using data to search for illegal immigrants, but now wants to expand its snooping to so-called extremist groups. The feds are now taking advantage of what Sandle called “lax privacy laws” in the US. So the government can “approach a third-party firm that sells databases of information on citizens, pay them for it and then use the data however deemed fit.” And they can do so without a warrant, too.

The government outsourcing warrantless domestic spying of American citizens to outside corporations doesn’t make it any less dangerous, unconstitutional or illegal.

Do any pols have the courage to stand up to an increasingly lawless & authoritarian national security state? https://t.co/pF78fcnuZL

You may not like the antics of the Proud Boys — I certainly don’t. I especially despise Antifa. But domestically spying on fellow Americans without a warrant should not be happening. And just because smart TVs have been collecting data on people in faraway China doesn’t mean it’s not happening here.

Click this link for the original source of this article.
Author: Kim Hirsch