Pelosi Publicly Shames GOP For Being Afraid Of Liz Cheney 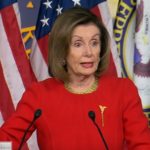 It appears that the guys leading the House Republicans are not men enough to deal with Representative Liz Cheney (R-WY). Instead, they are seeking a replacement who is “nonthreatening.” This sounds as if they want a 1950’s woman who will show up at the door when her husband comes home from a hard day at the office wearing an apron and nothing else. One of her perfectly manicured hands holds his martini, shaken not stirred.

It used to take a very special man to marry a strong woman. Now, it just takes a man, unlike House Minority Leader Kevin McCarthy (R-CA).

For telling the truth, Cheney will likely get tossed out of the Grand Old Party’s leadership. This even though she, like her dad former Vice President Dick Cheney (R) is “as emotional as algebra,” according to The New York Times magazine. Make an enemy of Liz Cheney, and it would not be unexpected that her dad would become one, too. Not a good plan.

But she is holding fast, telling truth to power:

‘The 2020 presidential election was not stolen. Anyone who claims it was is spreading THE BIG LIE, turning their back on the rule of law, and poisoning our democratic system.’

As Jack Nicholson said in A Few Good Men:

House Speaker Nancy Pelosi (D-CA) had some fun at the Republicans’ expense. Her office posted a mockup of an ad saying that the GOP in the House was seeking a “non-threatening female” to replace Cheney, third in power on the Republicans’ side of the House. The men have gone into their all-out-coward mode preferring to toss her out in a secret vote rather than manning up and including diverse opinions.

As the drumbeat for canning Cheney gets louder, Pelosi continues:

‘Word is out that House GOP Leaders are looking to push Rep. Liz Cheney from her post as House Republican Conference Chair – their most senior woman in GOP leadership – for a litany of very Republican reasons: she won’t lie, she isn’t humble enough, she’s like a girlfriend rooting for the wrong team, and more.’.

‘So what exactly are House GOP Leaders looking for in a #3? Punchbowl AM got the scoop and, well, it’s not surprising… they want a woman who isn’t a ‘threat’ to them.’

‘[She should be] not only relentlessly on message, but also someone who does not pose a threat to them and their power.’

‘Nothing about this is normal. The GOP is increasingly defined not by its shared beliefs, but by its shared delusions. To be a loyal Republican, one must be either a sucker or a liar…Knowingly repeating a lie – an act of immorality – is now the evidence of Republican fidelity.’

Cheney also went after Trump for inciting the January 6 mob that breached the US Capitol Building and hunted for legislators to hang.

McCarthy appeared on Fox & Friends and gave it the old we’re “concerned” about Cheney:

‘There’s no concern about how she voted on impeachment. That decision has been made. I have heard from members concerned about her ability to carry out the job as conference chair — to carry out the message.’