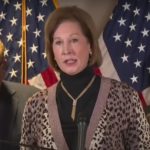 In a new court filing as part of their $1.3 billion defamation lawsuit against former Trump attorney Sidney Powell, the voting technology company known as Dominion Voting Systems has “accused the far-right conspiracy theorist of spreading lies about the company and the integrity of US democracy in order to sell books and make money,” as summarized by a new report from Business Insider. Throughout the weeks and months following the 2020 presidential election, Powell was one of the chief propagators of increasingly unhinged claims that the race had been somehow rigged for Biden. Dominion, she claimed, was involved in the imaginary rigging, but no supporting evidence has ever emerged.

Powell’s side has argued that no “reasonable person” would have taken her claims about the election as “statements of fact,” as though she wasn’t personally endorsing the theories as supposedly conclusively known — but that’s exactly what she was doing. Pretending like it was all just conjectural information relayed from somebody else is ridiculous. Powell has stated — unequivocally — that Trump “won by a landslide,” which is, of course, false. She has also claimed that Dominion “was created to produce altered voting results in Venezuela for Hugo Chavez,” which is also false.

As Dominion put it in their new court filing, Powell used her “defamatory falsehoods to solicit funds… and to garner media attention,” and this attention assisted in the sale of “additional copies of her book and drummed up additional potential clients.” Dominion has filed similar substantial defamation lawsuits against MyPillow founder and CEO Mike Lindell and longtime Trump ally Rudy Giuliani, both of whom also helped spread the lie that the 2020 presidential election had been rigged for Biden, in part with Dominion’s help.

Lindell is still claiming that evidence that could prove the alleged 2020 election fraud is just around the metaphorical corner, although it’s been months and months without anything legitimate emerging. Nevertheless, he claimed that a tell-tale “court thing” in Michigan was coming soon during a new appearance on Steve Bannon’s podcast.

Trump is still pushing the claim that the 2020 presidential election was, as he put it in a press release this week, “fraudulent.” It’s difficult to overstate the delusion underlying this idea. There’s just no legitimate evidence, anywhere — no court anywhere in the entire country has ever even partially accepted the idea that the election was rigged. Yet, Trump is continuing on with his delusion that much of the federal government alongside state authorities around the country were in on a scheme to fraudulently defeat him.

Enlightening to see that USSANEWS has caved to the Marxist theories as well. The past several days have seen USSANEWS reporting exactly what MSM wants them to. Sorry to see you go to the dark side.