VIDEO: Thief Attacks Police At Gun Range, Gets Shot By Everyone 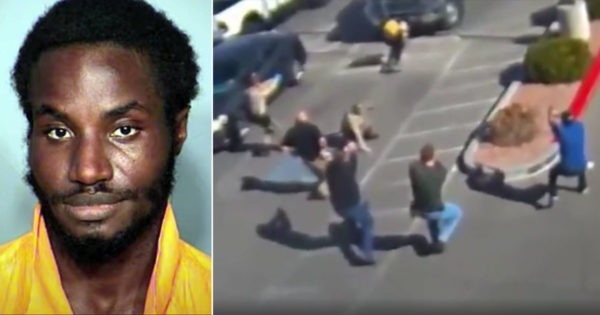 Video footage from February 3 at The Range 702 in Las Vegas, Nevada gun range shows a convicted felon entering a concealed carry class and attempting to steal a handgun, before attacking officers who were called to the scene and ultimately being shot to death by an officer and three attendees of the concealed carry class.

Convicted felon Marvon Payton Jr. entered the class and began rifling through a bag belonging to one of the attendees, but was noticed before he could steal a handgun.

Payton argued with employees until two officers from the Las Vegas Metropolitan Police Department arrived, and argued with the police in the parking lot. He then brandished a screwdriver and began repeatedly stabbing a female officer in the head and neck.

Officer Andrew Nguyen and three employees of The Range 702 then drew their handguns and opened fire on Payton. The felon was struck by 14 rounds and was pronounced dead at the scene.

Black Lives Matter activists on social media were quick to call Payton a victim of police brutality and racism, though attempts to orchestrate protests in his name were unsuccessful.

“A lot of time we’re giving that training and instruction, and a lot of time the people who come to us are people come into us after these kind of traumatic events or have been attacked,” Chanski said of the concealed carry class.