The ‘Post-Covid-19 World’ Will Never Come. 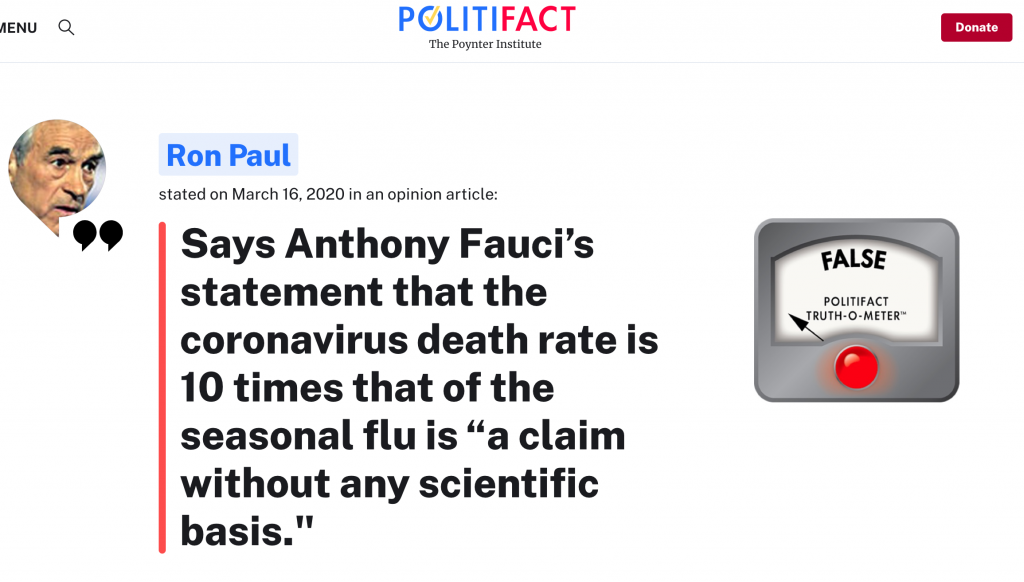 On May 3rd, the New York Times bannered “Reaching ‘Herd Immunity’ Is Unlikely in the U.S., Experts Now Believe” and reported that “there is widespread consensus among scientists and public health experts that the herd immunity threshold is not attainable — at least not in the foreseeable future, and perhaps not ever.”

In other words: the ‘news’-sources that were opposing the governments’ taking action against Covid-19 — libertarian ’news’-sites that oppose governmental laws and regulations, regardless of the predominant view by the vast majority of the scientists who specialize in studying the given subject — are looking wronger all the time, as this “novel coronavirus” (which is what it was originally called) becomes less and less “novel,” and more and more understood scientifically.

The “herd immunity” advocates for anti-Covid-19 policies have been saying that governments should just let the virus spread until nature takes its course and such a large proportion of the population have survived the infection as to then greatly reduce the likelihood that an uninfected person will become infected. An uninfected person will increasingly be surrounded by people who have developed a natural immunity to the disease, and by people who don’t and never did become infected by it. The vulnerable people will have become eliminated (died) or else cured, and so they won’t be spreading the disease to others. That’s the libertarian ’solution’, the final solution to the Covid-19 problem, according to libertarians.

For example, on 9 April 2020, Forbes magazine headlined “After Rejecting A Coronavirus Lockdown, Sweden Sees Rise In Deaths” and reported that, “Sweden’s chief epidemiologist Anders Tegnell has continuously advocated for laid back measures, saying on Swedish TV Sunday that the pandemic could be defeated by herd immunity, or the indirect protection from a large portion of a population being immune to an infection, or a combination of immunity and vaccination. However, critics have argued that with a coronavirus vaccine could be more than a year away, and insufficient evidence that coronavirus patients that recover are immune from becoming infected again, the strategy of relying on herd immunity and vaccinations [is] ineffective.”

The libertarian proposal of relying upon “herd immunity” for producing policies against this disease has continued, nonetheless.

CNN headlined on 28 April 2020, “Sweden says its coronavirus approach has worked. The numbers suggest a different story”, and reported that

On March 28, a petition signed by 2,000 Swedish researchers, including Carl-Henrik Heldin, chairman of the Nobel Foundation, called for the nation’s government to “immediately take steps to comply with the World Health Organization’s (WHO) recommendations.”

The scientists added: “The measures should aim to severely limit contact between people in society and to greatly increase the capacity to test people for Covid-19 infection.”

“These measures must be in place as soon as possible, as is currently the case in our European neighboring countries,” they wrote. “Our country should not be an exception to the work to curb the pandemic.”

The petition said that trying to “create a herd immunity, in the same way that occurs during an influenza epidemic, has low scientific support.”

Swedish authorities have denied having a strategy to create herd immunity, one the UK government was rumored to be working towards earlier on in the pandemic — leading to widespread criticism — before it enforced a strict lockdown.

FORTUNE magazine headlined on 30 July 2020, “How parts of India inadvertently achieved herd immunity”, and reported that, “Around 57% of people across parts of India’s financial hub of Mumbai have coronavirus antibodies, a July study found, indicating that the population may have inadvertently achieved the controversial ‘herd immunity’ protection from the coronavirus.” Furthermore:

Herd immunity is an approach to the coronavirus pandemic where, instead of instituting lockdowns and other restrictions to slow infections, authorities allow daily life to go on as normal, letting the disease spread. In theory, enough people will become infected, recover, and gain immunity that the spread will slow on its own and people who are not immune will be protected by the immunity of those who are. University of Chicago researchers estimated in a paper published in May that achieving herd immunity from COVID-19 would require 67% of people to be immune to the disease. Mayo Clinic estimates 70% of the U.S. population will need to be immune for the U.S. to achieve herd immunity, which can also be achieved by vaccinating that proportion of a population.

On 27 September 2020, Reuters bannered “In Brazil’s Amazon a COVID-19 resurgence dashes herd immunity hopes”, and reported that, “The largest city in Brazil’s Amazon has closed bars and river beaches to contain a fresh surge of coronavirus cases, a trend that may dash theories that Manaus was one of the world’s first places to reach collective, or herd, immunity.”

However, the day prior, on May 2nd, America had 30,701 new cases. Brazil had 28,935. Norway had 210. India had 370,059. Sweden’s latest daily count (as-of May 3rd) was 5,937 on April 29th, 15 times Norway’s 385 on that date. Sweden’s population is 1.9 times that of Norway. India’s daily count is soaring. Their population is four times America’s, but the number of new daily cases in India is twelve times America’s. Whereas India has had only one-seventh as much Covid-19 intensity till now, India is soaring upwards to become ultimately, perhaps, even worse than America is on Covid-19 performance. And Brazil is already almost as bad as America, on Covid-19 performance, and will soon surpass America in Covid-19 failure.

There is no “herd immunity” against Covid-19, yet, anywhere. It’s just another libertarian myth. But libertarians still continue to believe it — they refuse to accept the data.

Investigative historian Eric Zuesse is the author, most recently, of  They’re Not Even Close: The Democratic vs. Republican Economic Records, 1910-2010, and of  CHRIST’S VENTRILOQUISTS: The Event that Created Christianity.

Click this link for the original source of this article.
Author: Eric Zuesse

In other news...
‘Unarmed victim’? Suspect armed with two butcher kn...
Is It Still Unconstitutional If the Govt. Outsource...
Portland police crack down on rioters, issue new ru...
Cheney Rebuts Trump’s Tantrum With Op-Ed Clobbering...
Facebook Upholds Ban On Donald Trump For Treasonous...
STUDY: 70% of Men Would Rather Die Early Than Give ...
0 Comments
Inline Feedbacks
View all comments