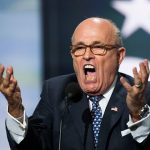 There is a small cadre of satellites orbiting around the ex-president until they are no longer of use to him. Then, he shoots them down (figuratively). The truth is like smoke weaving around and between these people, elusive and just out of grasp. One of those satellites, Donald Trump’s former fixer/attorney, is in trouble now.

Monday the former New York mayor claimed that federal prosecutors were trying to “frame” him. He said they were using the Foreign Agents Registration Act (FARA), because he supported Trump.

Giuliani appeared in an interview with Fox News to talk about this federal investigation. As a man who led the Southern District of New York federal attorneys, an elite group of prosecutors, he should know how much trouble he has created for himself.

He said that the investigation into whether he worked as an unregistered agent for Ukrainian clients was an attack by the former president’s enemies. By pushing himself under Trump’s skirts, he hoped to stand beneath the president’s protection.

Of course, his former boss can no longer pardon him, and Giuliani appears rather desperate. He said that by attacking him on FARA violations, they were attacking Trump. Not a bad move but totally insufficient.

‘They are trying to frame me. They are trying to find something they can make into a crime, some technical violation, some mistake I made. There is no way on earth that they could have anyone telling the truth that I was acting as a foreign agent, nor do they have any evidence that I tried to influence the government on behalf of clients.’

Giuliani has been dancing a fast as he can amidst ever-increasing reports that he went to Ukraine’s leaders to get then Ambassador to the Ukraine, Marie Yovanovitch. She is an experienced, very effective ambassador committed to eradicating corruption from the Ukrainian government. In the middle of the night, she received a call from a friend, who warned that she must get on the next plane out of the country. She did.

Just last week, the Federal Bureau of Investigation (FBI) agents raided the former mayor’s home and his office seeking his electronic devices by means of a search warrant. They had to have a very high level of certainty to raid the home of an attorney, especially one who served a sitting president.

Giuliani claimed to be cooperating with the Feds, but he cannot seem to get out from under the truth even as he struggled to find some excuse that would stick. Unfortunately, his previous actions embarrassed him, not the FBI.

‘The only lawyers they raid are lawyers for Donald Trump. I can’t think of another lawyer that has been raided other than lawyers for Trump. Trump is in a special category because he doesn’t have constitutional rights.’

In other news...
Cradle-to-Grave Stimmy: How We Got Here
The Nuclear Option
Exclusive: Army Plan May Loosen IC Grip On Sat-Base...
World WHAT Freedom Day?
This agreement is concluded between two entities.
Police Immediately Drop Investigation into Brabin’s...
0 Comments
Inline Feedbacks
View all comments