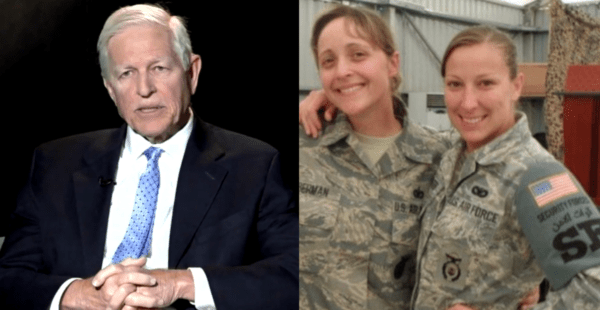 Terry Roberts, the lawyer for the family of Ashli Babbitt, has said that the Capitol Police officer who shot and killed her did not issue any kind of warning before doing so.

Ashli Babbitt, the Air Force veteran and election integrity protestor, was shot and killed by a as-of-yet unnamed Capitol Police officer during the protests on January 6th. Video footage shows Babbitt climbing through a window, where she was then shot by the officer. The lawyer for the officer in question, Mark Schamel, said that he had issued a verbal warning to Babbitt before he fired.

“It’s a false narrative that he issued no verbal commands or warnings,” Schamel said last month, claiming that witness statements corroborated his version of events. “He was screaming, ‘Stay back! Stay back! Don’t come in here!’” Schamel argued. However, in an interview with Sharyl Attkisson aired on Sunday, Terrell Roberts, the lawyer for Babbitt’s family, argued the exact opposite, saying that they had “interviewed several witnesses on the same side of the door,” as Babbitt, and that they “didn’t hear any kind of warning”:

I think a reasonable officer would know, given the noise on the other side of the door, that anything that he’s saying would not be heard. In fact, if you watch the video carefully, there’s an officer in a suit that strolls across the hallway at the time that he is supposedly yelling an announcement, who doesn’t even seem to react to that. So those are three important factors why we think he didn’t give an announcement.

As National File reported last month, Roberts said that Babbitt’s family would be pursuing civil action against the officer, after the Department of Justice announced that they would not be pursuing criminal charges against him, claiming that there was “insufficient evidence to support a criminal prosecution.” He later announced that they would be looking for civil damages of at least $10 million.

“For someone to say, ‘well, she got what she deserved,’ without understanding what the law is, is not an informed decision, I would say,” Roberts told Attkisson. “If this case happened out in Minneapolis or some other place, and it wasn’t politically charged, I think that most people would see this as an obvious case of excessive force.”

Unarmed protestor Ashli Babbitt was shot by a police officer during the January 6th riot on Capitol Hill. This week on Full Measure— both sides of the debate over her death. pic.twitter.com/93ny2EWZQA

Out of the originally reported five individuals whose death was linked to the protests on Capitol Hill, Babbitt is the only one whose death was ruled as a homicide by the D.C. Chief Medical Examiner. The most recent ruling was on the death of Capitol Police officer Brian Sicknick, who the mainstream media had initially claimed was beaten to death with a fire extinguisher by “white supremacists” – his death was ruled as a result of natural causes, after he suffered two strokes cause by a blood clot in his brain stem.

In other news...
Young Black Woman Obliterates Actress Alyssa Milano...
Jim Acosta Blasts Fox News, Ignores CNN’s Own Propa...
Get Ready For The Most Painful Inflation Since The ...
Mark Levin sounds off on Biden's 'radical' agenda i...
New Report Exposes Larger Lies by Cuomo in Regard t...
Rep. Clyburn: America is great because of ability t...
0 Comments
Inline Feedbacks
View all comments