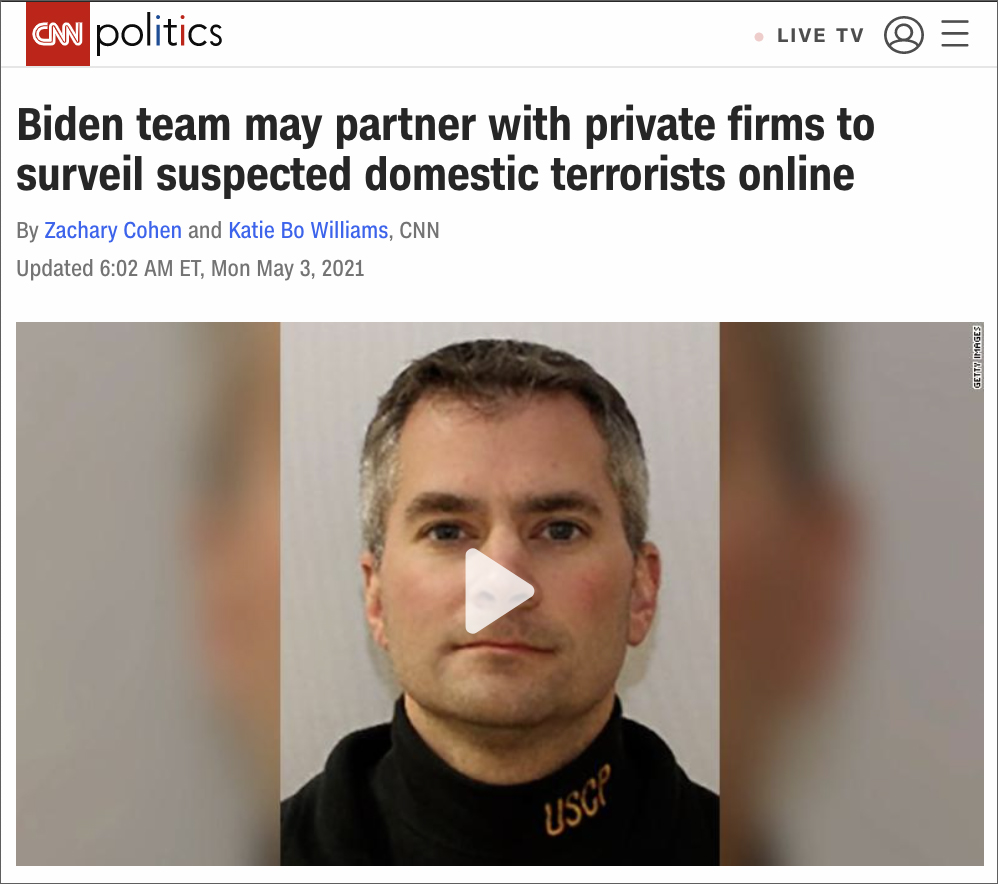 Joe Biden’s White House is considering tasking the private sector with surveilling the online chatter of American citizens to identify “domestic terrorists,” according to CNN.

Since the Department of Homeland security can only browse through unprotected public information on social media sites, the DHS is discussing using outside companies to “legally access” private chat logs of right-wing groups like the Oathkeepers and Proud Boys to monitor their conversations.

This Constitutional work-around would grant the DHS access to information that not even the FBI, CIA, or NSA are allowed to collect.

“By partnering with research firms who have more visibility in this space, the DHS could produce information that would likely be beneficial to both it and the FBI, which can’t monitor US citizens in this way without first getting a warrant or having the pretext of an ongoing investigation. The CIA and NSA are also limited on collecting intelligence domestically,” CNN reported on Monday.

“Domestic violent extremists are really adaptive and innovative. We see them not only moving to encrypted platforms, but obviously couching their language so they don’t trigger any kind of red flag on any platforms,” a DHS official told CNN.

“What do you do about ideology that’s leading to violence? Do you have to wait until it leads to violence?”

“We are exploring with our lawyers, civil rights, civil liberties and privacy colleagues, how we can make use of outside expertise,” the DHS official added.

Fortunately, some members of Congress are wary of tasking companies to perform extra-Constitutional actions on the federal government’s behalf — in other words, corporate fascism.

“There’s a tension between wanting to empower [DHS’s intelligence office] to do this kind of work around domestic terrorism on the one hand and then on the other hand the misuse of its capabilities during the summer of 2020, gives a lot of people on the Hill pause [when it comes to] potentially giving them new authorities, capabilities or resources,” a Senate aide told CNN.

This comes after Biden during his address to Congress last week characterized “white supremacist terrorism” as America’s top threat.

Alex Jones breaks down Joe Biden’s ‘Joint Address’ to Congress as he declared war on Americans, and Alleged his political opponents were ‘white supremacist terrorists.’