Biden Hikes Refugee Admission Cap To 62,500 After Outcry From Progressives 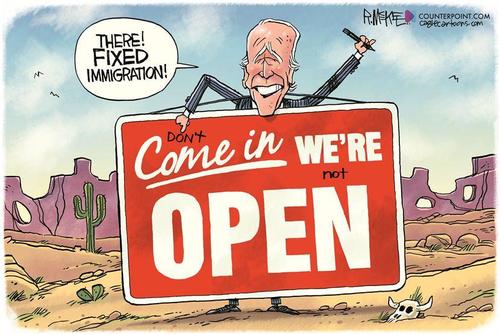 Those wondering if Joe Biden is just a figurehead for the progressive/socialist wing in the Democratic party may have gotten their definitive answer today when Joe Biden announced that he will set the number of refugees who can enter the U.S. through September at 62,500 following cries of outrage from the progressives who blasted his earlier abandonment of that goal.

Biden’s capitulation ends a dizzying policy reversal by sticking with Biden’s original plan to dramatically increase the number of refugees that can be admitted into the U.S.

“Today, I am revising the United States’ annual refugee admissions cap to 62,500 for this fiscal year,” Biden said in a statement.

“This erases the historically low number set by the previous administration of 15,000, which did not reflect America’s values as a nation that welcomes and supports refugees.”

“It is important to take this action today to remove any lingering doubt in the minds of refugees around the world who have suffered so much, and who are anxiously waiting for their new lives to begin,” Biden said.

The announcement comes two weeks after the White House said Biden would raise the limit by May 15, but signaled his initial target was not achievable. Biden said his decision to meet his original goal conveys his commitment to creating a more welcoming immigration system, which some of his supporters questioned after his backtracking.

At the same time, Biden said the U.S. would not meet its target of admitting 62,500 refugees this year. “We are working quickly to undo the damage of the last four years. It will take some time, but that work is already underway,” he said.

“The sad truth is that we will not achieve 62,500 admissions this year,” Biden wrote.

“We are working quickly to undo the damage of the last four years. It will take some time, but that work is already underway. We have reopened the program to new refugees. And by changing the regional allocations last month, we have already increased the number of refugees ready for departure to the United States.”

As The Hill notes, the administration initially called for raising the refugee cap to 125,000 by the end of Biden’s first year in office — a target that would require allowing 62,500 refugees fleeing war and natural disasters to enter the United States. The high figure was set to be a dramatic turnaround from the Trump administration, which limited the number of potential refugees allowed to enter the U.S. to 15,000 during their last year in office.