Thus Far in 2021, Big Tech Has Cracked Down on Free Speech More than Ever Before

The following article, Thus Far in 2021, Big Tech Has Cracked Down on Free Speech More than Ever Before, was first published on Flag And Cross.

Only four months into this year, an analysis finds that Big Tech has worked to eliminate free speech more than ever before.

An analysis of these fascist efforts to end free speech on the Internet awarded Big Tech a bit fat “F” for its un-American efforts to aid and abet the far-left.

Per the Media Research Center:

At least 10 separate tech platforms silenced then-sitting President of the United States Donald Trump over the speech he gave in Washington, D.C. the day of the Capitol riot. Both Google and Apple pulled Parler from their app stores. Amazon Web Services also cancelled its contract with Parler, shutting the burgeoning social media site down for more than five weeks. Google removed LifeSiteNews from its advertising programs, and YouTube shut down its channel. YouTube demonetized Steven Crowder’s channels. Amazon removed Ryan T. Anderson’s book examining transgender ideology, and it also removed a Clarence Thomas documentary while continuing to sell at least 270 hate items.

That consistent assault on free speech makes 2021 an ideal time to track the biases and failures of Big Tech. Starting with this quarter and going forward every three months, the Media Research Center’s Free Speech America operation will grade the top Big Tech companies, including social media, search media and others that form the backbone of our online lives.

This quarter, Big Tech earned a collective “F.” Every one of the Big Tech companies reviewed got an “F” in free speech. That’s simply appalling. The quarter began with unparalleled restriction of the president of the United States. It was unquestionably the low point for online freedom since the creation of the internet.

The MRC added its report card: 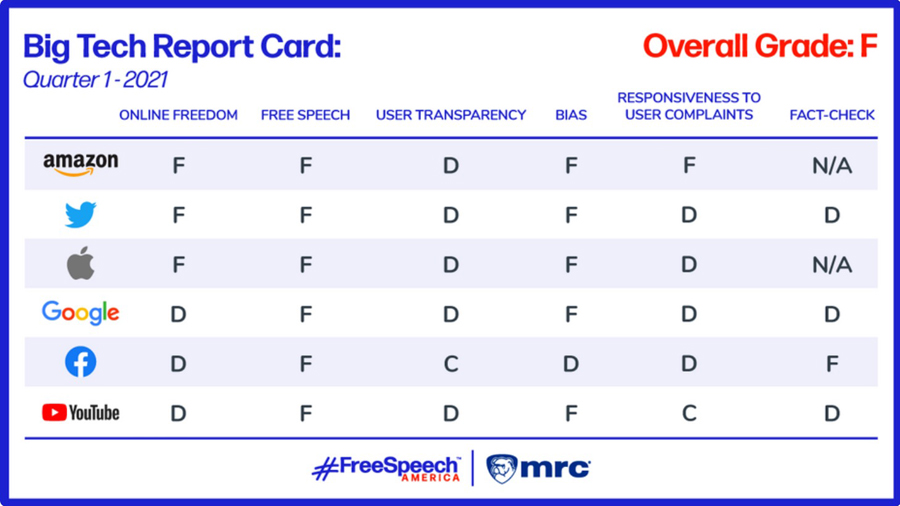 The MRC went on in its report to detail all the reasons why each company in the graph above have failed their marks for freedom and liberty.

Continue reading: Thus Far in 2021, Big Tech Has Cracked Down on Free Speech More than Ever Before …