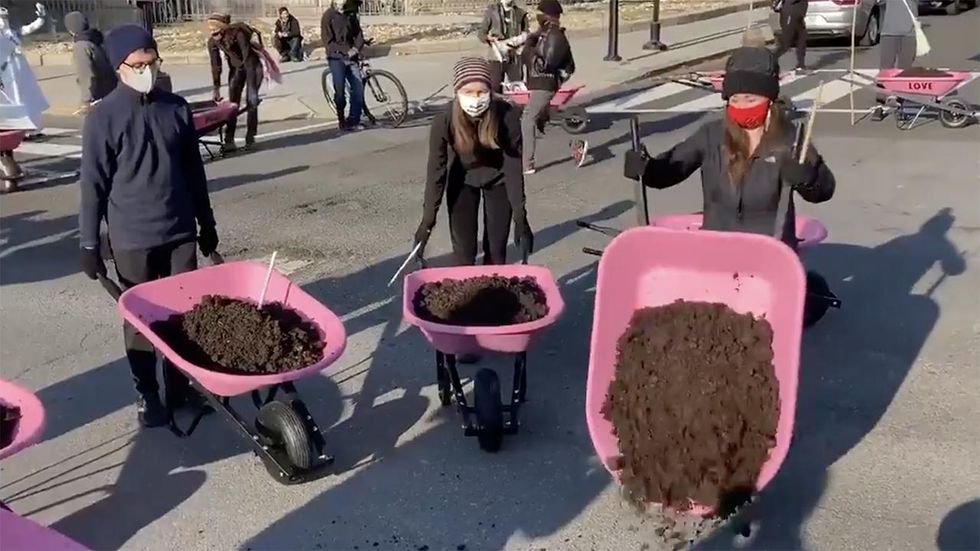 It’s difficult to describe Joe Biden as president with a word that doesn’t involve some form of fecal matter. His border crisis is a giant butt burrito. His plan to hike taxes will drop a giant dookie on the economy. His son is a giant dinkleberry. And that’s just using poop as a descriptor. It says nothing about the giant loads Biden doesn’t realize he dropped in his tighty whities. Even though his staff realizes and still has to blame it on the dogs. Or Merrick Garland.

We all think Joe Biden is full of sh!t. Who woulda thunk we’d find common ground with the wackadoodles from Extinction Rebellion? A climate plan that has already killed jobs and has the opportunity to kill more jobs? That’s not enough! The rebellers believe Biden talks a big game about saving the planet, but it’s all bullplop. So to express their displeasure, they used actual bull plop.

The activists believe Joe Biden’s plan to curb carbon emissions by 2030 is bullsh!t. So, they did the only rational thing to do. Dumped bullsh!t.

“His plan to reduce carbon emissions by at least 50% by 2030, long after he’s out of office, is too little, too late,” the spokesman said of Biden. “We need net-zero carbon emissions by 2025. Anything else guarantees climate destruction and nails the coffin shut for millions across the globe.”

As the activists marched to the White House, they chanted a series of anti-Biden slogans and insulted his intelligence.

“The science is there,” one activist shouted over the White House fence. “Biden, can you do math? Why are you selling us short?”

I’m surprised they were even able to push the wheelbarrows. Manure can be heavy, and vegan lifestyles tend to lead to a lack of upper body strength. We all remember when Extinction Rebellion tried spraying “blood” out of the firehose and it ended very badly for them.

What’s troubling is that, with any other president, such silliness would do more harm than good. Any other president wouldn’t take Extinction Rebellion seriously. But our president is Joe Biden, who has yet to meet a radical leftist idea he hasn’t pandered to. Knowing Biden, they’ll be wheeling their poop barrels into the Oval Office for lunch and a Presidential Medal of Freedom.