The World Reacts to the End of the George Floyd Trial

The World Reacts to the End of the George Floyd Trial 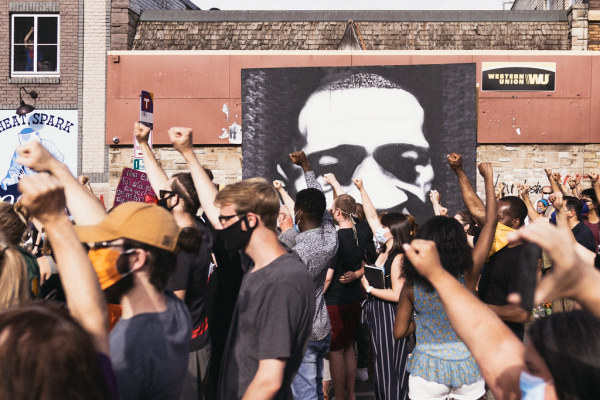 On Tuesday, the world watched as former Minneapolis Police Department officer Derek Chauvin was found guilty of the murder of George Floyd. The verdict came at the end of a highly controversial trial that spanned three weeks and featured a total of 45 witnesses.

As crowds of people celebrated the news across the United States, President Joe Biden voiced his relief. In a video released on Twitter by civil rights attorney Ben Crump, the President could be heard speaking to the family of George Floyd over the phone.

“I’m feeling better now,” said Biden. “Nothing is going to make it all better, but at least God now there’s some justice … I think of Gianna’s comment, ‘My daddy is going to change the world, he’s going to start to change it now.’”

President Biden labelled the family as “incredible,” telling them “I wish I was there to put my arms around you.”

Speaking to President Biden, Mr Crump posited: “hopefully this is the momentum for the George Floyd Justice in Policing Act to get passed to have you sign,” to which the President replied:

“You got it pal, that and a lot more. This can be our first shot at dealing with genuine systemic racism.”

“I’m just so thankful to the entire family, your courage – your strength. This is a day of justice in America. We really do believe that with your leadership and the president that we have in the White House, that we’re going to make something good come out of this tragedy, OK?”

“And you better all get ready,” Biden interjected, “because when we do it, we’re going to put you on Air Force One and get you here. I guarantee it.”

In Minnesota, Attorney General Keith Ellison, the lead prosecutor in the Derek Chauvin murder trial, addressed his victory shortly after the jury delivered its guilty verdict.

“I would not call today’s verdict ‘justice,’ however, because justice implies true restoration,” Ellison told reporters outside the Hennepin County Government Center. “But it is accountability, which is the first step towards justice.”

Ellison’s message was one that was mirrored in thousands of other reactions, with many members of the United States government sharing their thoughts on Twitter.

“George Floyd’s death was a tragedy and although this conviction is a step toward accountability, it will not erase the pain felt by the Floyd family and Black Americans.”

“It’s not justice … Justice is George Floyd going home tonight to be with his family. Justice is when you’re pulled over there not being a gun that is part of that interaction because you have a headlight out. Justice is your school system not having or being part of the school-to-prison pipeline. Justice is a municipality and a government that does not value military and armaments more than it values healthcare and education and housing.”

Speaker of the United States House of Representatives, Nancy Pelosi, thanked George Floyd at the Congressional Black Caucus for “sacrificing” his life “for justice.” She called Mr Floyd’s calls for his mother “heartbreaking” and noted that Mr Floyd’s name would “always be synonymous with justice.” Later, Sen. Pelosi endorsed the ‘Justice In Policing’ Act on Twitter and said George Floyd “did not die in vain.”

Democrat Representatives reiterated Sen. Pelosi’s endorsement of the Justice In Policing Bill, with Elizabeth Warren imploring the Republican party to “open your eyes and unplug your ears.”

In a statement made with his wife, former President Barack Obama welcomed the verdict:

“True justice requires that we come to terms with the fact that Black Americans are treated differently, every day. It requires us to recognize that millions of our friends, family, and fellow citizens live in fear that their next encounter with law enforcement could be their last. And it requires us to do the sometimes thankless, often difficult, but always necessary work of making the America we know more like the America we believe in.”

Celebrities and corporations also weighed in to give their support.

“Our nation has a long journey ahead before it establishes the justice and equity that Black Americans deserve. The murder of George Floyd is a tragedy and a crime, and no jury can bring him back to life or reverse the pain and trauma experienced by his family and still felt across the country and around the world. Today’s verdict is a step forward in acknowledging painful truths and for the continued cause of defeating racism and fighting discrimination. Our company remains committed to the continued path ahead.”

In many US cities, protesters kept their promise of enacting violence in the wake of the trial. In Portland, Oregon, far-left groups smashed windows and set the Apple store on fire, and one protester was filmed brutally punching a police officer in the face. In Minneapolis, a Black Lives Matter representative was filmed declaring:

“That’s what the power of the people is. We are powerful, we can get the change that we want. Let me tell you, the only reason this system, this capitalist system remains intact is because the Democrats and Republicans are working together to maintain it. That’s why I’m not an independent, I’m not a Republican, I’m not a Democrat. I’m a god damn revolutionary.”

Earlier, the representative was captured standing next to Courteney Ross, the girlfriend of George Floyd, as she made a speech outside of the Hennepin County Courthouse thanking Mr Floyd for “giving his life”:

“Change is coming, so watch out… There’s gonna be change in the future, and we still have a lot of reparations to make from the past.”

Outside of the Minneapolis Courthouse, a large crowd holding Black Lives Matter placards welcomed the news, and protesters in Washington DC line-danced in celebration of Derek Chauvin’s murder conviction. In Houston’s Third Ward, the neighbourhood where Mr Floyd grew up, a crowd member called the verdict bittersweet:

“[George Floyd’s] life is still gone. I wouldn’t call it a celebration. Let’s call it a premature step for what needs to be for everybody … I’m happy for the outcome.”

The racial activist organisation Black Lives Matter reacted to the verdict on Twitter and lamented that it took “330 days to confirm what we already knew.”

“This isn’t proof the system works. It’s proof of how broken it is. Because it took us this long, and this much attention. Until we have a world where our communities can thrive free from fear, there will be no justice.”

In the UK, public and political figures gave their thoughts on the conviction. Prime Minister Boris Johnson asserted that he was “appalled” by the death of George Floyd and “welcom[ed] the verdict.”

“I think you could almost feel, looking at social media, the sigh of relief America felt as if it was taking a breath again. Justice has been done … But there’s a long way to go, not just in America, but right across the world including here in Scotland to tackle structural, systemic racism.”

Scottish Secretary for Justice Humza Yousaf repeated Ms Sturgeon’s message, asserting that “the murder of George Floyd forced us to hold a mirror to ourselves.”

In Canada, Prime Minister Justin Trudeau condemned “systemic racism and anti-Black racism,” and the leader of the New Democratic Party, Jagmeet Singh, called the news “one small step in the right direction.”

FoxNews anchor Tucker Carlson suggested that the jury was threatened into the decision to convict Mr Chauvin and condemned public support of militant racial movements:

“Everyone understood perfectly well the consequences of an acquittal in this case. After nearly a year of burning and looting and murder by BLM [Black Lives Matter], that was never in doubt. Last night, two thousand miles from Minneapolis, police in Los Angeles pre-emptively blocked roads. Why? They knew what would happen if Derek Chauvin got off. In the end, he didn’t get off; if given the maximum sentence under the law he will spend the rest of his life in prison. Is that a fair punishment? We can debate all that. But here’s what we cant debate – no mob has the right to destroy our cities, not under any circumstances, not for any reason. No politician or media figure has the right to intimidate a jury, and no political party has the right to impose a different standard of justice on its own supporters. Those things are unacceptable in America, all of them are happening now. If they continue to happen, decent productive people will leave. The country as we knew it will be over. So we must stop this current insanity, it’s an attack on civilization.”

Conservative commentator Candace Owens tweeted: “George Floyd is not and will never be a name that is synonymous with justice. He victimized too many people during his life.” Likewise, conservative activist Jack Posobiec castigated far-left racial justice movements.

In the coming weeks, Derek Chauvin’s defence team is expected to appeal against the result of the trial.