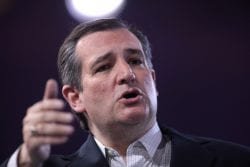 When I first announced my run for the United States Senate and met with voters across the Lone Star state, one of the bedrock promises I made to Texans was to never request or support earmarks.

Now, more than a decade after Congress abolished earmarks, the swamp is trying to bring them back. For too long, the practice of inserting special interest pork spending into legislation to fund wasteful pet projects enabled Congress’s spending addiction and represented Washington corruption at its worst.

Directing funds to projects like the Alaskan “Bridge to Nowhere,” an indoor rain forest in Iowa, a Teapot Museum, absurd research projects like one analyzing goth culture, and countless others cost billions of taxpayer dollars while doing little to benefit anyone other than the member of Congress’ re-election campaign, their friends and family, and lobbyists.

According to the taxpayer watchdog group Citizens Against Government Waste, Congress has doled out over 111,000 earmarks worth more than $375 billion since 1991.

Earmarks like these were used as a form of legal bribery to buy and sell votes. Lawmakers loved nothing more than “bringing home the bacon,” and it didn’t matter the cost paid by American taxpayers.

Earmarks enabled party bosses to pass irresponsible and bloated spending bills that have plunged us into $28 trillion of debt.

Before they were banned, earmarks got multiple members of Congress convicted on corruption charges. Reps. Chaka Fattah, Duke Cunningham, and Bob Ney were all convicted for their efforts to profit personally from their roles in the earmark process.

When Republicans led the charge to ban earmarks in 2011, it was a major step toward limiting the power of the swamp. But sadly, just last month, House Republicans turned back on that promise and threw away one of the most significant conservative victories of the last decade. This was a serious mistake.

Bringing back earmarks would do more than just put more money in the pockets of rich lobbyists in Washington D.C. — it would completely undo a crucial reform enacted a decade ago to restore public trust in our legislative process.

Pork belongs on our dinner plates, not our legislatures.

We’ve already seen that President Joe Biden and his Democrat allies in Congress are going to keep trying to spend more and more. But the American people are watching. After President Biden unveiled his massive not-so-infrastructure package, a recent Harvard-Harris poll showed that 80 percent of voters are concerned about its wasteful spending.

We simply cannot afford to allow big spenders in Congress to use earmarks to pass massive spending packages and stick future generations with the bill.

That’s why I’m leading the fight in my own party to keep the ban on earmarks, root out corruption, and focus on delivering for the American people, not special interests.

Americans lost trust in their elected representatives because of the corrupt earmark process. We can’t let it be brought back.

Ted Cruz is a U.S. Senator for Texas.

The views and opinions expressed in this commentary are those of the author and do not reflect the official position of the Daily Caller News Foundation or Conservative Daily News.

TED CRUZ: Time To Hold The Line Against Pork Barrel Spending is original content from Conservative Daily News – Where Americans go for news, current events and commentary they can trust – Conservative News Website for U.S. News, Political Cartoons and more.

Click this link for the original source of this article.
Author: Sen. Ted Cruz