Biden Orders Americans To Celebrate ‘Independence’ From COVID, Not Great Britain, On July 4 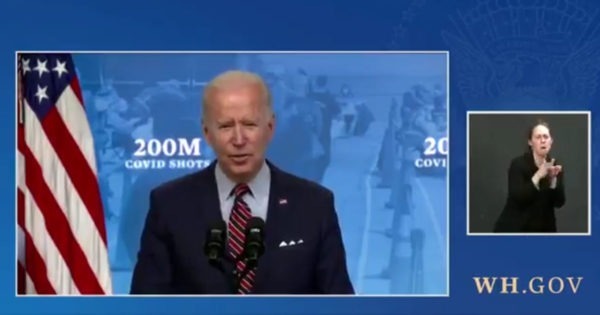 “But let me close with this, back in March 11th, I outlined a vision of what America could look like by the Fourth of July,” Biden said. “An America that was much closer to a normal life that we left behind more than a year ago.”

“We remain on track for that goal,” Biden continued. “In the weeks since then, more than a hundred and twenty million shots have been given since i announced the July 4th proposal. More of our kids are back in school, and after a long and painful year more grandparents are able to hug their grandkids again.”

Biden added, “To celebrate our independence from this virus on July 4, with family and friends in small groups, we still have more to do in the months of May and June.”

President Biden says the U.S. is on track to meet his goal of being “closer to normal life” on July 4.

“To celebrate our independence from this virus on July 4, with family and friends in small groups, we still have more to do.” pic.twitter.com/l2lXz56jC2

Biden’s remarks come after he was absent from a meeting with the Japanese Prime Minister last week:

Vice President Kamala Harris welcomed Japanse Prime Minister Yoshihide Suga to the White House this week, noticeably absent from the meeting President Joe Biden, continues to shy away from public appearance with world leaders in lieu of delegating his presidential duties to Harris.

“It is now my great pleasure to welcome the Prime minister of Japan, and to thank him for this visit, which is the first visit to the United States of a world leader, um, since we came in office,” Harris said. “Uh, the President and I are very excited about the conversations we will have with the Prime Minister.”