Evidence continues to mount that facemasks are not only ineffective at stopping the spread of COVID-19, but also trap carbon dioxide which leads to cognitive loss and other adverse health effects.

Leave it to Big Tech to suppress recent findings which go against the narrative set by Dr. Anthony Fauci and CDC bureaucrats.

In a tweet by former Trump campaign staffer Steve Cortes on Friday, Cortes cites a Nov. 22 Stanford University study regarding CO2 trapping and face masks.  The tweet was removed a few hours later and Cortes was suspended from Twitter, according to Raheem Kassam of the British conservative blog National Pulse.  This appears to confirm what has been stated in publications from the CDC in from June 2020 regarding the dangers of masks trapping CO2 and also earlier studies such as one from Harvard University in 2015 regarding effects of CO2 concentrations on cognitive ability. 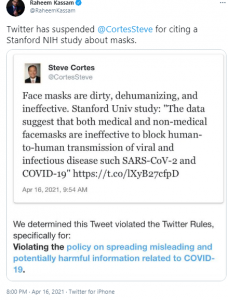 “It is not clear however, what the scientific and clinical basis for wearing facemasks as protective strategy, given the fact that facemasks restrict breathing, causing hypoxemia and hypercapnia and increase the risk for respiratory complications, self-contamination and exacerbation of existing chronic conditions,” the Stanford study said, with the hypothesis stating, “1) the practice of wearing facemasks has compromised safety and efficacy profile, 2) Both medical and non-medical facemasks are ineffective to reduce human-to-human transmission and infectivity of SARS-CoV-2 and COVID-19, 3) Wearing facemasks has adverse physiological and psychological effects, 4) Long-term consequences of wearing facemasks on health are detrimental.”

The publication lists the dangers of oxygen deficiency (hypoxemia) and increased levels of CO2 (hypercapnia), which even for few minutes can be severely harmful or lethal. “Chronic mild or moderate hypoxemia and hypercapnia such as from wearing facemasks resulting in shifting to higher contribution of anaerobic energy metabolism, decrease in pH levels and increase in cells and blood acidity, toxicity, oxidative stress, chronic inflammation, immunosuppression and health deterioration,” the study continued. In other words, they overstress the body and weaken the very immune system needed to fight COVID. (Need this writer reference George Carlin’s route about swimming in raw sewage again?)

No surprise why Twitter’s censors were so agitated by the tweet.

The study goes on: Early in the spread of COVID-19, the World Health Organization and CDC both recommended the masks not be worn and even acknowledged the dangers. “WHO repeatedly announced that at present, there is no direct evidence (from studies on COVID-19) on the effectiveness face masking of healthy people in the community to prevent infection of respiratory viruses, including COVID-19 […] Despite these controversies, the potential harms and risks of wearing facemasks were clearly acknowledged [emphasis ours]. These including self-contamination due to hand placement or non-replacement when the mask is wet, soiled or damaged, development of facial skin lesions, irritant dermatitis or worsening acne and psychological discomfort. Vulnerable populations such as people with mental health disorders, developmental disabilities, hearing problems, those living in hot and humid environments, children and patients with respiratory conditions are at significant health risk for complications and harm.”

Here are some other points that may have triggered Twitter corporate.

There is no benefit to wearing the facemasks, the study concluded. Yet instead of Twitter encouraging (or passively facilitating) public dialogue over this critical issue, the information is actively being suppressed.

Click this link for the original source of this article.
Author: Leland Freeman