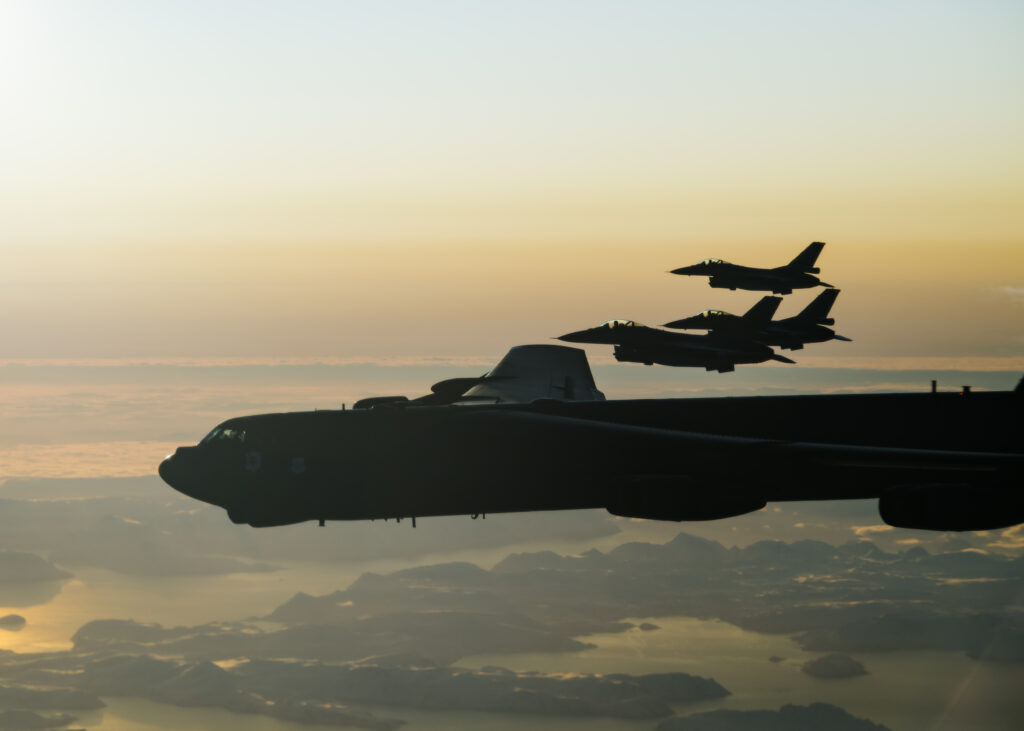 Three Norwegian Air Force F-16s and a US Air Force B-52H fly over the Barents Sea above the Arctic Circle.

WASHINGTON: American and NATO ships, submarines, and aircraft will soon come calling at a handful of new ports and airfields in the Norwegian Arctic, thanks to a major new pact signed Friday.

The Supplementary Defense Cooperation Agreement will allow the US to build infrastructure at three air bases and a navy facility along the Norwegian coast to bolster American and NATO allied operations in the Arctic and North Atlantic.

The agreement must still be ratified by the Norwegian Parliament, a move expected by the summer.

Once it’s approved, the US will be able to start building new facilities at the Rygge, Sola, and Evenes airfields, along with the Ramsund navy base, while rotating troops and contractors to those bases to maintain facilities and service US aircraft and ships.

The Ramsund facilities would mark the second base where American submarines and ships can regularly resupply along Norway’s North Atlantic coast, following the expected opening of the Tromso port even further north to American submarines in the coming weeks after undergoing a major expansion effort last year.

The new work is likely to include facilities for P-8 surveillance planes and B-1 bombers, which would use the bases as a launching pad to monitor Russian submarines sailing from Northern Fleet’s main base on Kola peninsula, hard up against the Norwegian border.

The US government will pay for all facilities it builds on Norwegian soil, and won’t permanently base any troops there, officials in Oslo were quick to point out. It’s a point the Norwegian government has long stressed when talking about US Marine rotations to the country for training.

“Our cooperation with our allies is under continuous development,” said Norwegian Minister of Foreign Affairs Ine Eriksen Søreide. “The agreement reaffirms Norway’s close relationship with the US and confirms Norway’s key position on the northern flank of NATO…our policies regarding the stationing of foreign forces on Norwegian territory, the stockpiling or deployment of nuclear weapons and port visits remain unchanged,” she added.

While the exact scope or timing of any of the proposed construction remains unclear until final approval, Defense Minister Frank Bakke-Jensen said in an interview with the Barents Observer that fuel supply facilities will be built at Rasund.

The Orland and Evenes airfields will not only see more American aircraft, but will be the main operating bases for Norway’s growing fleet of F-35s. Norway has been quick to integrate the F-35s they have already taken possession of into NATO exercises, and the country will eventually operate 52 F-35As, which will be joined beginning in 2022 by five new P-8 surveillance aircraft.

The additions to the bases, along with the Norwegian buildup reflect the deep concern NATO has over the Russian buildup in the High North. Testifying before the Senate Armed Services Committee last week, European Command chief Gen. Tod Wolters said advances in Russia’s submarine fleet, “and expanding maritime strategic goals have reinvigorated Russia’s access to the broader Atlantic Ocean,” require increased diligence by the US and its allies in the region.