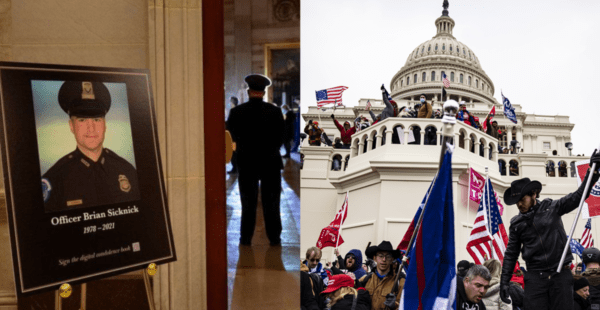 Officer Sicknick was present on Capitol Hill on January 6, when pro-Trump protestors demonstrated during the reading of the Electoral College votes, causing Congress to halt its business. At one point, Sicknick “engaged” with the protestors, and was sprayed in the face with some substance by two individuals, who stand accused of assaulting him with a “powerful chemical irritant.” After returning to his office, Sicknick collapsed, and died 8 hours later on January 7th.

However, Francisco J. Diaz, the chief medical examiner for the District of Columbia, released a ruling on Monday, confirming that Sicknick had in fact died of “natural causes,” after suffering two strokes at the base of the brain stem, caused by a clot in the artery that supplied blood to that area of the body. Speaking to the Washington Post, Diaz said that there was no evidence that Sicknick had suffered any allergic reactions to chemical irritants, which would have “caused [his] throat to quickly seize,” nor was there any evidence of “internal or external injuries.”

The ruling from Diaz now strongly contradicts statement made at the time by various authorities. The Capitol Police had previously stated that Sicknick was “injured while physically engaging with protestors.” Then acting Attorney General Jeffrey Rosen said in a statement at the time that Sicknick had not died of natural causes, but of “the injuries he suffered defending the U.S. Capitol,” promising that federal authorities would “spare no resources in investigating and holding accountable those responsible.”

Senator Cory Booker had claimed that Sicknick’s death amounted to a “crime” that “demands the full attention of federal law enforcement,” claiming that “white supremacists” had “attacked” the Capitol, “spilling” Sicknick’s blood.  Various media outlets, including the New York Times, initially pushed claims from anonymous law enforcement officials that Sicknick had been attacked with a fire extinguisher, and died as a result of blunt force trauma, spinning the narrative that his death was due to the “white supremacists” as Booker argued. These outlets later quietly walked back their claims.

Today’s ruling from Diaz will likely make it “difficult” for any prosecutors who decided to peruse homicide charges against the two men accused of assaulting him, the Washington Post noted. At the time of writing, only one death linked to the Capitol Hill demonstrations that has been confirmed as a homicide is Ashli Babbitt, the pro-Trump protestor who was shot and killed by a Capitol Police Officer. National File reported Wednesday that the Department of Justice will not name or charge the officer responsible for her death.