Maxine Waters Crosses State Lines To Tell Rioters To ‘Stay On The Streets’ And ‘Get More Active, More Confrontational’ 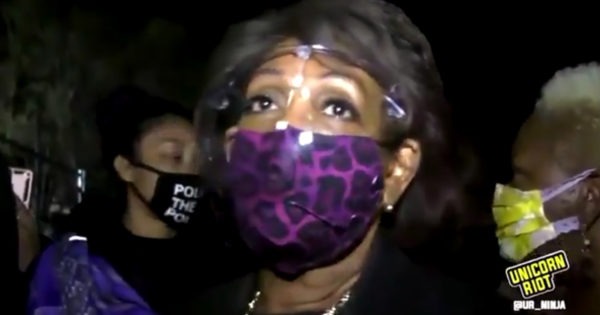 Democrat U.S. Rep. Maxine Waters (D-CA) traveled to the Minneapolis area city of Brooklyn Center, Minnesota, to join the ongoing riots in the area sparked by the death of Daunte Wright. Wright was in the process of being arrested after he was charged with aggravated robbery stemming from an incident where he allegedly choked a woman at gunpoint when he began to flee from the police, prompting a female police officer to mistakenly shoot him with her service weapon, believing she had pulled her taser.

Filmed by the far left activist media group Unicorn Riot, Waters was seen wearing a mask and protective eye wear in Brooklyn Center in a video posted yesterday night. She was asked, apparently by Unicorn Riot, if she believes former police officer Kim Potter is to blame for Wright’s death.

“This is guilty for murder. I don’t know whether it’s third degree, but as far as I’m concerned it’s first degree murder,” said Waters. The Unicorn Riot camera man then asked Waters what she believed should be done to make sure the legal system understands their demands for a successful murder conviction. She replied that, should the officer not be convicted for first degree murder, then “We gotta stay on the streets, we gotta get more active, we got to get more confrontational, we got to make sure they know we mean business.”

“[Protestors] got to stay on the street and get more active, more confrontational. They’ve got to know that we mean business.” pic.twitter.com/GLIPoLwZnd

Waters has previously endorsed aggressive confrontations with individuals who disagree with leftist politics. In 2018, she famously told members of a crowd to publicly confront members of the Trump administration.

Speaking specifically in reference to the so-called “kids in cages” under the Trump administration, something that has expanded thousands of times over under the Biden regime, Waters said, “If we can’t protect the children, we can’t protect anybody. If you see anybody from that cabinet in a restaurant, in a department store, at a gasoline station, you get out and you cause a crowd, and you push back on them, and you tell them they’re not welcome.”