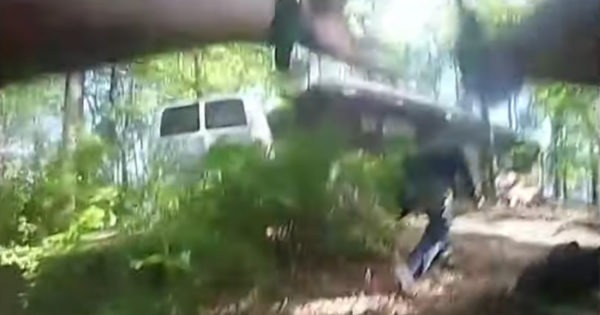 A man was recently shot inside his home after lunging at police two times armed with a ceramic knife. Newly released body cam footage reveals the black police officer begged the man at least 47 times to drop the knife, before the man lunged at police again, prompting the gunshots that ended his life.

A concerned neighbor in DeKalb County, Georgia called police to report a suspicious person inside a home that was originally believed to be vacant. When police made contact with the individual, now named as 35-year-old Matthew Williams, a black man, he was reluctant to speak to them. After several minutes and several pleadings for him to drop his weapon – a ceramic knife with a blue handle – he lunged at the police officers, then ran into the nearby woods. Body cam footage was apparently provided to local media.

Eventually, police established that Williams fled back into the home. Over the course of the next several minutes, police realized he returned to the house. One police officer, a sergeant, said, “I’m begging you, you’re a black man, I’m a black man, you don’t have to die today. I don’t want you to die today.”

Williams refused, saying that he was defending his property. Police attempted to breach the door at least twice, with Williams immediately slamming it on the officers the first time. Eventually, Williams opened the door and lunged at police while armed with the knife. Police officers responded to the violent behavior by firing at the man, and then called a SWAT team to breach the home, which revealed Williams’ lifeless body.

Local media, who have reviewed the entirety of the body cam footage, reveal that police begged Williams to drop his weapon at least 47 times before he lunged at police officers, provoking the shooting that ended his life. Still, local media repeatedly questioned why police believed the call from the neighbor, who insisted the property was vacant, when the property was in fact inhabited by Williams. In response, the police say they had no way of knowing that Williams was the lawful resident, and were simply responding to the suspicious person call reported by the neighbor.