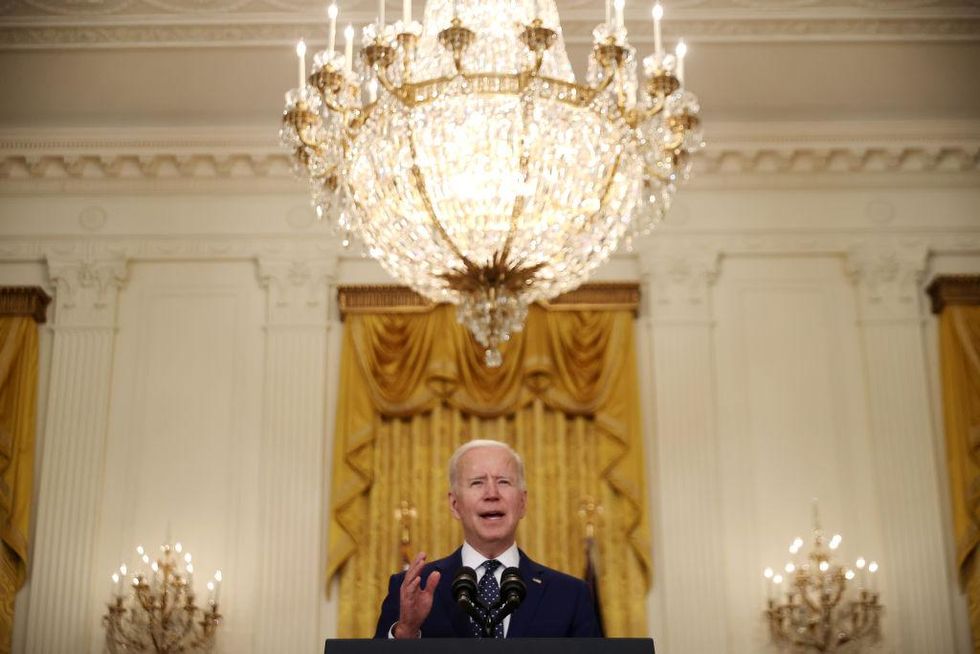 President Joe Biden received a tidal wave of criticism on Friday following the announcement that the administration would not increase refugee admissions this year. Much of the backlash that Biden received for keeping the historically low refugee caps set by former President Donald Trump was from fellow Democrats, including the outspoken Rep. Alexandria Ocasio-Cortez (D-N.Y.).

While running for president, Biden promised to reverse much of the immigration policies of the Trump administration. Biden made a campaign pledge to drastically increase Trump’s refugee cap of 15,000 per year to 125,000, and promised to “raise it over time commensurate with our responsibility, our values, and the unprecedented global need.”

Increase the number of refugees we welcome into the country. With more than 70 million displaced people in the world today, this is a moment that demands American leadership. Offering hope and safe haven to refugees is part of who we are as a country. As a senator, Joe Biden co-sponsored the legislation creating our refugee program, which Trump has steadily decimated. His Administration has reduced the refugee resettlement ceiling to its lowest levels in decades and slammed the door on thousands of individuals suffering persecution, many of whom face threats of violence or even death in their home countries. We cannot mobilize other countries to meet their humanitarian obligations if we are not ourselves upholding our cherished democratic values and firmly rejecting Trump’s nativist rhetoric and actions. Biden embraces the core values that have made us who we are and will prioritize restoring refugee admissions in line with our historic practice under both Democratic and Republican Administrations. He will set the annual global refugee admissions cap to 125,000, and seek to raise it over time commensurate with our responsibility, our values, and the unprecedented global need.

However, Biden is on track to accept the fewest number of refugees this year of any modern president, including Trump, according to a report from the International Rescue Committee.

In February, Biden’s State Department issued a report to Congress proposing to increase the cap to 62,500 for the current fiscal year, according to CBS News.

Democrats wrote a letter to Biden earlier this month demanding that he act and raise the refugee cap.

“Having fought for four years against the Trump Administration’s full-scale assault on refugee resettlement in the United States, we were relieved to see you commit to increasing our refugee resettlement numbers so early in your Administration,” Democratic lawmakers wrote. “But until the Emergency Presidential Determination is finalized, our refugee policy remains unacceptably draconian and discriminatory.”

Despite his campaign promise, the State Department’s recommendation, and a plea from fellow Democrats, Biden will continue with Trump’s refugee cap number of 15,000.

Rep. Alexandria Ocasio-Cortez: “Completely and utterly unacceptable. Biden promised to welcome immigrants, and people voted for him based on that promise. Upholding the xenophobic and racist policies of the Trump admin, incl the historically low + plummeted refugee cap, is flat out wrong. Keep your promise.”

Rep. Ilhan Omar: “As a refugee, I know finding a home is a matter of life or death for children around the world. It is shameful that @POTUS is reneging on a key promise to welcome refugees, moments after @RepSchakowsky @RepJayapal, myself and others called on him to increase the refugee cap.”

Joaquin Castro: “I strongly disagree with the Biden administration’s decision to maintain Trump’s historically low refugee policy. Raising the refugee resettlement cap is vital for American global leadership and to restore the soul of our nation. I urge the President to keep his promise.”

Rep. Joe Neguse: “America has long been a beacon of hope to refugees around the world, including my family. As a son of refugees & Co-Chair of the Congressional Refugee Caucus, proud to join @RepJayapal @Ilhan and @janschakowsky in imploring the Biden administration to honor our nation’s values.”

Rep Pramila Jayapal: “It is simply unacceptable and unconscionable that the Biden Administration is not immediately repealing Donald Trump’s harmful, xenophobic, and racist refugee cap that cruelly restricts refugee admissions to a historically low level.”

Rep Pramila Jayapal: “It is simply unacceptable and unconscionable that the Biden Administration is not immediately… https://t.co/eqMKSX5moN

There were swift reactions by press members, included Washington Post White House reporter Seung Min Kim, who wrote on Twitter, “One thing to remember is that the 62,500 refugee figure Biden pledged was already a prorated figure for a fiscal year that was half over. An apples-to-apples comparison is that Biden pledged 125,000 refugees and decided to stick with 15,000. Quite the stunning drop.”

Julie Davis, congressional editor at the New York Times, showed the similarities of the rationale of Biden and Trump on their refugee cap decisions.

Biden’s team is using the same rationale to justify a historically low refugee cap as Trump’s did, pointing to the… https://t.co/etRjy88vnH

The Atlantic writer Adam Serwer tweeted, “Biden maintaining Stephen Miller’s refugee policy is not something anyone should defend. It’s a disgrace.”

Stephen Miller, who spearheaded the Trump administration’s immigration policy, chimed in, “Thoughts on this announcement: 1. This reflects Team Biden’s awareness that the border flood will cause record midterm losses *if* GOP keeps issue front & center 2. Staggering # being released at border DWARF # saved by not raising cap 3. Refugee cap should be reduced to ZERO*.”

In other news...
The Romanoffs
China-Backed Student Group Pressures Cornell on Edu...
How Republicans Will Respond To The Democrats' Aggr...
Another Russia Hoax Confirms: ‘Weaponizing’ of U.S....
Feds rescind university president's threat to facul...
Super Rich Started Last Civil War and They are Doin...
0 Comments
Inline Feedbacks
View all comments