VIDEO: Protester shows reporter can of soup ‘for my family’ — then winks at camera. Protesters have pelted cops with cans amid Daunte Wright rioting. 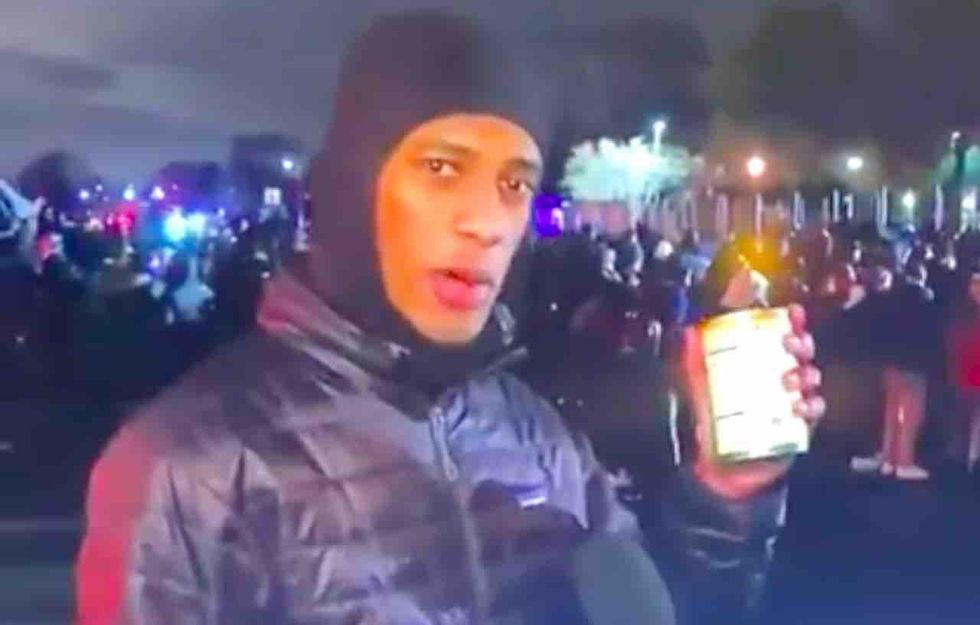 A protester in Brooklyn Center, Minnesota, got a little cute with CNN reporter Sara Sidner during an on-camera interview Wednesday night amid a crowd gathering in response to the police-involved fatal shooting of Daunte Wright.

The protester told Sidner , “I’m just standing here today with soup for my family” — and as he held aloft a can, the protester winked for the camera.

Sidner apparently picked up on the wink, as she inquired, “You’re not planning on using that are you? Throwing it at police?”

The protester replied — this time with no wink — “Like I said, it’s for my family.”

“Literally for your family?” she pressed.

I don’t think that can of soup is for his family. #CNN #BreakingNews https://t.co/QpTjm2siA7

The Twitter user who posted the clip included text that read, “I don’t think that can of soup is for his family.”

A number of commenters pointed out that the protester’s “soup for my family” phrase was used last year by former President Donald Trump who described protesters who he said
used soup cans as weapons. Here’s a clip juxtaposing the protester’s words with Trump’s words:

Whatever the protester’s intentions, it’s likely no joke to police. Indeed, former Brooklyn Center Police Chief Tim Gannon — who resigned Tuesday along with Kim Potter, the officer who pulled the trigger — said during a Monday news conference that amid a “riot” after the shooting “officers that were putting themselves in harm’s way were being pelted with frozen cans … they were being pelted with concrete blocks.”

Incredibly, multiple presser attendees pounced on Gannon’s use of the term “riot” and
ordered him not to utter it, saying “Don’t do that!” and “that was no riot!” and “it was not a riot.” But Gannon stood his ground: “Yes, there was.”

How did folks react to the winking protester?

While the vast majority of commenters enjoyed the protester’s words and wink, a handful weren’t on board with him: