‘Don’t you dare start this s**t!’: Lone man furiously stands up to mob of left-wing militants gathered in front of police in Brooklyn Center 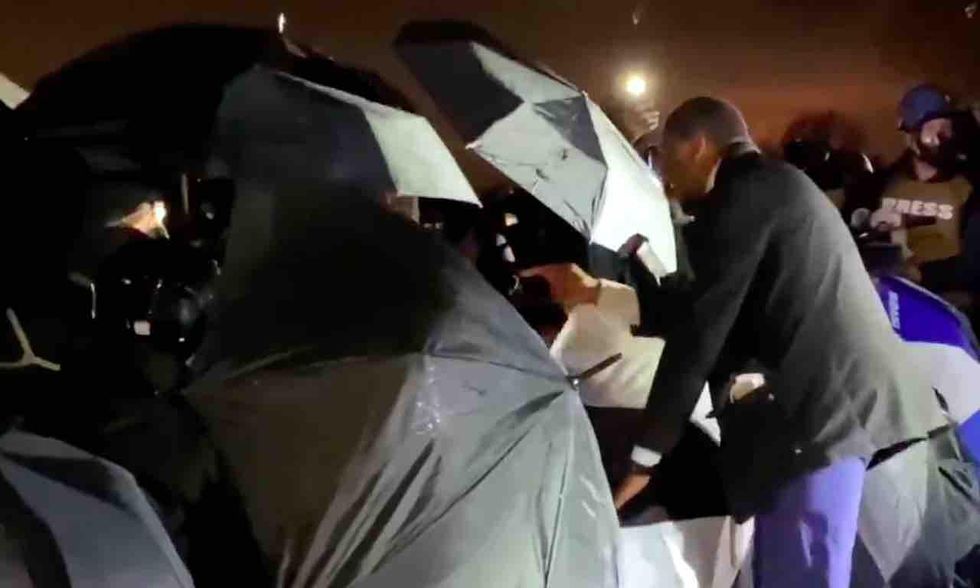 A lone man was caught on video furiously confronting a large group of left-wing militants gathered in front of police Wednesday night in Brooklyn Center, Minnesota, where protests and riots have ensued nightly since the police-involved fatal shooting of Daunte Wright over the weekend.

Independent journalist Brendan Gutenschwager posted the clip on Twitter and said the man “briefly tried taming the line of umbrellas” and stood “between them and police” and was “discouraging agitation” of officers.

It isn’t clear who the man is or exactly why he’s angry at the militants, but leftist protesters toting their umbrellas to hide their identities have long inflicted violence upon others in the streets and damaged and destroyed property.

“Don’t you dare start this s**t!” he yelled at the group, grabbing one of the umbrellas and pointing his finger through the opening. “Not here tonight! Not here tonight!”

At one point the man’s body shook as he clenched his fists and jumped in place while screaming at the mob:

One of the militants hollered back at the man that “they’re the ones that are starting that s**t!” presumably in reference to police. Another militant who sounded like a female yelled at the man, “Yo! Get the f*** outta here!”

Another militant questioned why the group should be “peaceful” and then screamed at police, “There’s no such thing as f***ing peaceful! You f***ing killed from the beginning, bro! F*** you!”

The man began trying to engage the latter militant when the clip ended.

“Don’t you dare start this s***” A man briefly tried taming the line of umbrellas, standing between them and police… https://t.co/kqXoI0tu0e

How did folks react?

Some commenters reacting to the clip didn’t like the man’s stance (“a false preacher preaching lies“), while others expressed support for his actions and contempt for the militants:

In other news...
Satan Soldiers and Big Tech Pouring BILLIONS Into
Law graduate & dad Khuram Javed shot dead near ...
In Rare Act of Journalism, NYT Cold-Calls DC Think ...
A world without police | Greg Kelly
“Spend as much as you can and then spend a little b...
West Virginia Governor Will Not Veto Bill Banning B...
0 Comments
Inline Feedbacks
View all comments