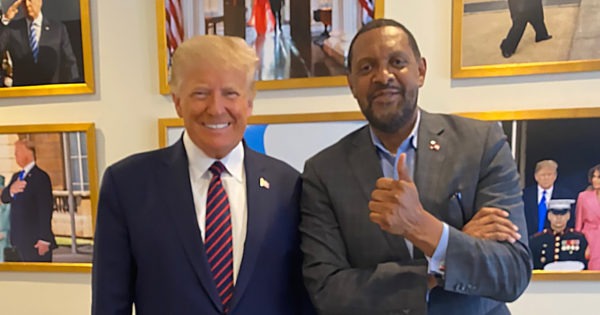 Former Georgia State Rep. Vernon Jones, a longtime Democrat who left the party to join the Republican Party under President Donald Trump, is set to announce his campaign for Governor of Georgia on Friday, April 16.

Jones announced his intention to run with the announcement of a press conference in a tweet on April 15. “The time has come,” wrote Jones. “Georgia is ready!” In the attached image, containing information about the press conference, Jones writes, “Former George State Representative, Vernon Jones, is hosting a national press conference tomorrow highlighting his decision to run as Governor of the state of Georgia.” He continued, “In the midst of a battle that will determine the future of not just Georgia, but the future of America and our great experiment known as Democracy, we need a fighter for Georgia. Vernon Jones will address this need and his future efforts to put Georgia first.”

The time has come. Georgia is ready! pic.twitter.com/ClIcnF6JtI

While rumors swirl that former U.S. Rep. Doug Collins may enter the race, having already been encouraged to do so at a rally held by President Trump in the days leading up to the January 5 Senate runoff, President Trump has seemingly offered a large degree of support to Jones.

The location is set, Mr. President. I hope to see my fellow Georgians at Liberty Plaza at 10am as I share my plans for the future of this state.

President Trump previously pledged to return to Georgia and campaign vigorously against Governor Brian Kemp’s opponent to enact retribution for what many perceive as Kemp’s unwillingness to investigate credible claims of widespread voter fraud within the state after the 2020 presidential election.

Jones made headlines one year ago today when he publicly endorsed President Trump while still serving as a Democrat in the Georgia legislature. In a video recorded at the time, Jones borrowed from President Ronald Reagan, and declared, “I didn’t leave the Democratic Party, the party left me.”

I’m a Georgia State Representative and lifelong Democrat. But in this election, I’ll be casting my vote for @realdonaldtrump.