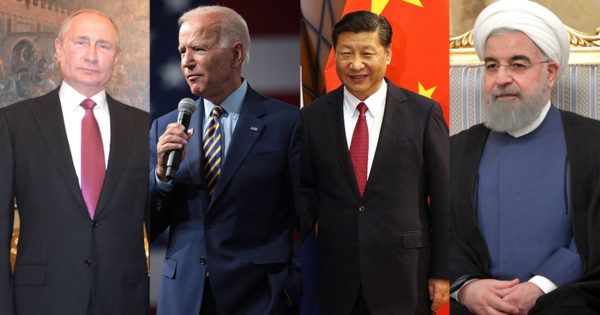 Today, after backing down from a potential conflict with Russia in the Black Sea due to Russia’s warning to stay away for the Untied States’ “own good”, Joe Biden announced a new series of sanctions against Russia for their alleged interference in the 2020 election. Despite intelligence experts declaring last year that Russia interfered on behalf of Republicans, and China and Iran interfered on behalf of Biden and the Democrats, Biden has thus far remained completely silent on Chinese and Iranian interference.

International media reported that today “Washington’s U-turn in Crimea came on the day Biden announced sweeping new sanctions against Moscow.” They explain, “The US expelled 10 diplomats in retaliation for the Kremlin’s interference in American elections, its aggressive actions in the Ukraine, and the SolarWinds cyber hack,” and “the United States sanctioned 32 Russian entities and individuals along with six technology companies, formally attributed the SolarWinds cyber breach to Russian intelligence agencies, and accused Moscow of still trying to hack American targets.”

Despite these sanctions against Russia over their alleged interference in the 2020 election, Biden has remained completely silent on Chinese and Iranian interference. As National File reported earlier this year, DNI John Ratcliffe declared that “Based on all available sources of intelligence, with definitions consistently applied, and reached independent of political considerations or undue pressure—that the People’s Republic of China sought to influence the 2020 U.S. federal elections.”

Meanwhile, it was confirmed that Iran sent phony emails purporting to be sent by the Proud Boys, threatening physical violence against Democrats and using racist language, in an attempt to sway the election in Biden’s favor. “Iran sending spoofed emails designed to intimidate voters, incite social unrest, and damage President Trump. You may have seen some reporting on this in the last twenty-four hours, or you may have even been one of the recipients of those emails,” said Ratcliffe.

All of this comes as the Biden regime ignores warnings from top security personnel that the SolarWinds hack – cited by Biden as part of the reason for the new sanctions against Russia – may have been committed by China. As National File reported, SolarWinds has deep ties to Chinese nationals who have favor with the Chinese Community Party. In just one example, SolarWinds board member Kenneth Hao led the investment of $75 billion of United States money into the Chinese economy.