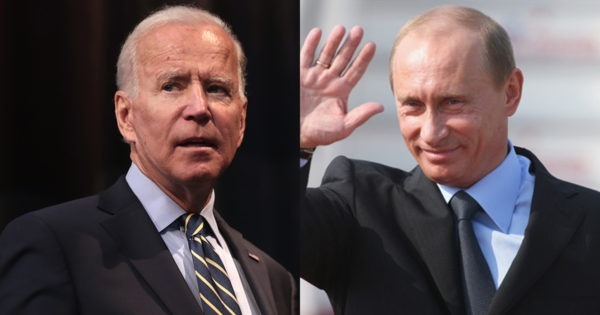 Earlier this week, it was reported that Joe Biden sent two U.S. Navy warships to the Black Sea as Russia builds up troops in Eastern Ukraine. Yesterday, Russian President Vladimir Putin warned the United States and Biden to stay away from the region for the country’s “own good”. Today it was confirmed that Biden ordered the troops to stand down and stop heading for Black Sea.

Biden recently threatened “consequences” for Russia as they prepared a large military buildup in Eastern Ukraine.“As we speak right now, I tell you I have real concerns about Russia’s actions on the borders of Ukraine… President Biden’s been very clear about this. If Russia acts recklessly, or aggressively, there will be costs, there will be consequences,” said Secretary of State Antony Blinken.

The next day, Putin offered a veiled threat to the Biden regime, warning them to stay away from the region for the United States’ “own good.” Russian Deputy Foreign Ministry Sergei Ryabkov was reported as saying, “We warn the United States that it will be better for them to stay far away from Crimea and our Black Sea coast.” He continued, “It will be for their own good.”

Today Biden seems to have backed down from the confrontation, with the Daily Mail reporting “President Joe Biden has cancelled the deployment of two US warships from the Black Sea despite warning Vladimir Putin there would be ‘repercussions’ for the troop build-up in Ukraine.” The British website continued, “the Biden administration has reversed the decision after the Kremlin warned them to ‘stay away for their own good.’”

Biden’s decision to back down also comes as he has asked Putin for a one-on-one, in person meeting, despite rejecting a similar offer from Putin one month ago. Putin previously offered to live stream such a discussion to better foster relations between the two countries, with the Biden White House almost immediately declining the opportunity, claiming the American president is “quite busy.”

In other news...
The Vanishing Hong Kong… China’s Latest Casualty
Liberty University Ditches Falkirk Center Name, Ann...
Mother Of Four Who Kept Capitol Protesters From Bre...
Maybe it Was All the Riots That Helped Fuel the Cov...
How does radical political correctness undermine it...
Ruling Class Unites To Push The “Vaccines”
0 Comments
Inline Feedbacks
View all comments