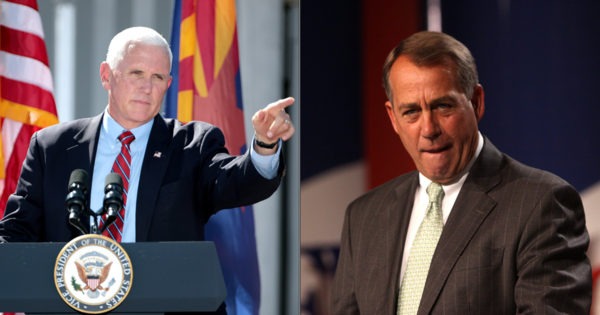 Despite aides to the former President declaring that Mike Pence abandoned his loyalty to President Donald Trump and the U.S. Constitution by failing to challenge electoral college votes from states with credible accusations of widespread voter fraud, former Republican Speaker of the House John Boehner claims that Pence should command respect from President Trump’s supporters due to his “loyalty” to the 45th President, and believe Pence has a “pretty good” chance at securing the 2024 Republican nomination.

According to the former establishment Republican Speaker’s new book and recent media interviews, the top 2024 presidential contender is Pence, who should poll “pretty good with the Trump types because you’re never going to find anybody as loyal to the president as Mike Pence was. I mean loyal when it hurt to be loyal.” He went on to claim that, during the 2016 presidential campaign, “Mike Pence stood there like a rock on behalf of Trump and for the next four years did the same thing.”

This runs contrary to remarks made by a former Pence aide that were published by National File. The former Pence aide, who went on to work in the Trump administration, reveals that Pence was working with then-RNC Chair Reince Priebus in a scheme to enact a coup that would have removed President Trump from the 2016 ticket and become the nominee after the tapes of the 45th President engaging in locker room talk were aired in October of 2016. Pence only abandoned this plot when confronted by President Trump.

Boehner also lambasted President Trump for criticizing Pence’s refusal to challenge the electoral votes. “For the president to say what he did about Pence on Jan. 6 was really a sad spectacle,” said Boehner.

The former Republican Speaker’s new book apparently contains passages overwhelmingly flattering toward Pence, who he calls “a fire-eater,” a “good member” and “a calm, collected, unflappable professional” who should be strongly considered as the Republican nominee for President in 2024.

“Mike Pence basically left the [2024] presidential race on January 6,” said Navarro, before adding that Pence’s aide, Marc Short, “is trying to portray Mike Pence as not cutting and running, [but] what he did that day, January 6, on the advice of Mike Short, was to cut and run from the President of the United States and from the Constitution.”

Boehner is remembered as one of the strongest members of the establishment wing of the Republican Party during his time in office, something he proudly defends in his book, in which he bemoans both President Trump and the Tea Party movement that saw many populist Republicans elected to Congress during the Obama administration.