Right Out of the Gate: Moment of Shame for Major League Baseball In Atlanta 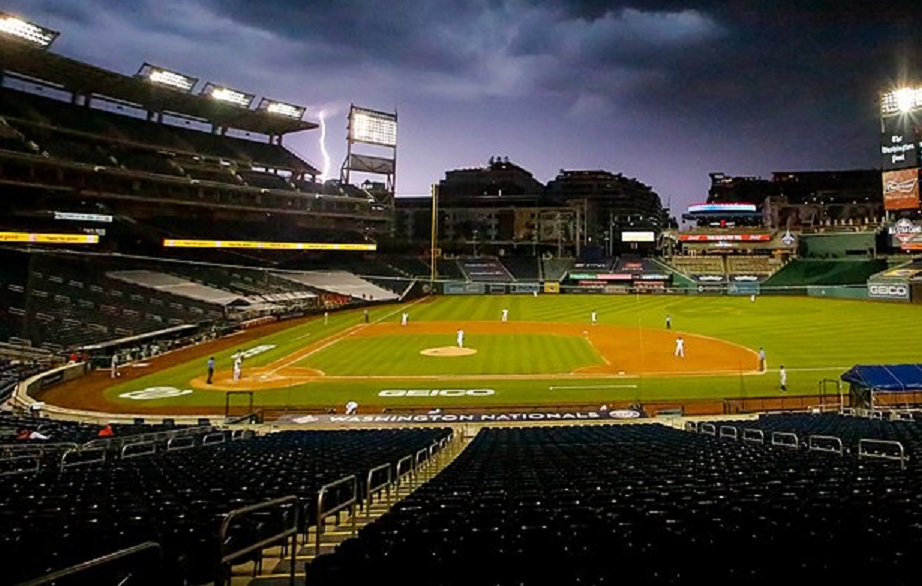 Surge Summary: It has been a bittersweet start to Baseball Season 2021: Major League Baseball’s removal of the All Star Game from Atlanta over controversy involving Georgia’s election reform laws is a demonstration of slander and cowardice. The nation, and especially the businesses of that city, will suffer for it.

For many, baseball’s Opening Day signals a great awakening after a long winter.

It’s all about neon-green new grass, with the sweet sounds of the crack of a bat and the smack of a fastball into a catcher’s mitt.  Plus, hot dogs, peanuts and childhood memories.

Baseball games were one of the last unifying experiences.   I’ve often sat next to fans with diametrically opposed political views or team loyalties, while we nonetheless bonded.  Men still remove their caps for the National Anthem, and cheer at the introduction of military veterans in attendance.

But the same people who are wrecking everything else good and decent have taken serious aim at America’s national pastime.  They’ve been at it for a while, injecting politics here and there, such as “rainbow” days and BLM motifs on bases and caps while fans try not to notice.

But the leftwing weasels hit a grand slam when Major League Baseball Commissioner Rob Manfred moved the All-Star Game out of Atlanta over Georgia’s new voting law.  Look at what we can make them do!

This is another rip in the national fabric, and it’s based on bald-faced lies.

Joe Biden weighed in, calling the new law “Jim Crow on steroids” and urged MLB to abandon Atlanta, a city that heavily voted for him.   On March 25, he labeled Republicans’ state initiatives to strengthen election security “sick, sick, sick,” and “un-American,” and quipped, “This makes Jim Crow look like Jim Eagle.”

Just because Mr. Biden has birds on the brain doesn’t mean the rest of us have to. This isn’t even about Georgia’s law, which is laxer than that of New York or Mr. Biden’s Delaware.  It actually expands early voting, makes covid-prompted drop boxes permanent (but fewer), and requires an ID for obtaining absentee ballots.  It should have been far tighter, but Republicans feared a backlash, which came anyway.

The real aim of this evil demagoguery is the Democrat’s desire to enact H.R. 1, the misnamed “For the People Act,” which would end two-party politics by eliminating state voter ID laws, federalize election procedures and thwart efforts to keep voter rolls clean.  Anyone who opposes this one-party power grab is, of course, “racist.”

As Healer in Chief, Joe “Unity” Biden helped launch the MLB betrayal of Atlanta and the state of Georgia. Now that it’s souring, he’s trying, clumsily, to back away.  Too late. He owns it, just as he does the tsunami of illegal immigrants at the border.

Also culpable is BLM icon Stacey Abrams, the defeated Georgia gubernatorial candidate who is George Soros’ surrogate in advancing Marxism in the Peach State and beyond.  As the economic damage spreads in Atlanta, she’s claiming she never meant for this to happen.

Meanwhile, the players have done their part to get the season underway. My own Nationals opened their season with a thrilling, walk-off hit by superstar Juan Soto in the bottom of the ninth.  Their victims? None other than the Atlanta Braves, who might at least have been grateful they were out of town while their fans seethed over the theft of the All-Star Game from their home field.  The Braves did slug four homers off future Hall of Famer Max Scherzer before succumbing.

One of baseball’s most wonderful aspects is its love and nurturing of tradition.

In late March, longtime baseball icon Bobby Brown passed away. The president of the American League from 1984 to 1994, Dr. Brown played for the New York Yankees from 1946 through 1954, retiring as a five-time World Series champion before embarking on a medical career as a cardiologist.

During his tenure as AL president, Bobby fined and suspended cantankerous Yankee skipper Billy Martin for kicking dirt on an umpire.  It didn’t matter that Billy had been a teammate of his.

Dr. Brown was old school all the way, married for 60 years to his sweetheart, the former Sara French. I doubt that this no-nonsense guy, a veteran of World War II and the Korean War, would have taken the sucker bait and moved the All-Star Game out of Atlanta over the Left’s blatant lies about Georgia’s election law.

That’s what current MLB Commissioner Rob Manfred did in the face of corporate pressure from Coca-Cola and Delta Airlines. These firms carpet-bombed their own city and state.  So, what about the fallout? Relax.  It only affects the “little people,” not the executives, right?

The suits will still attend Davos and have boxes at Truist Park in Smyrna. They just won’t be so popular among Atlanteans deprived of at least $100 million in All-Star Game spending.  The Braves must feel great, too.  Their state has been “tomahawk chopped,” but it’s also a message to the rest of America to get “woke” or else.

So, the All Stars go from Atlanta, a city more than half black and in desperate need of a post-pandemic boost, to Denver, a majority white city with progressive politics.  This is how liberals roll.

Over in Augusta, where Mr. Manfred is a member of the country club that stages the Master’s, the tournament proceeded on schedule.  As it should have.

Georgia’s citizens and fans deserve an apology and a reversal of Manfred’s craven move.  And for committing this huge error, he should be thrown out of the game.

Robert Knight is a contributor to The Washington Times. His website is roberthknight.com.

The post Right Out of the Gate: Moment of Shame for Major League Baseball In Atlanta appeared first on DailySurge.