Biden, You’re Not A President. You’re Just An Old Fool!

“No drug, not even alcohol, causes the fundamental ills of society.  If we’re looking for the source of our troubles, we shouldn’t test people for drugs, we should test them for stupidity, ignorance, greed, [senility] and love of power.”  —P. J. O’Rourke, a contemporary American political satirist and journalist

Somehow the people manage to elect the dimmest Democrat politicians to public office who seem to be disconnected from reality, devoid of logic and reason and without a lick of common sense.  The electorate is so stupid it votes for party over substance, it votes for government dependence instead of independence and self-reliance, it votes for race over character and it votes for socialism over constitutional freedom.  Now just how smart is that?

But Americans get what they vote for and they are about to get a nasty taste of what they voted for in President Joe “Jim Crow Obsessed” Biden; Kamala “Socialist hair brain” Harris; Chuck “I want my mommy” Schumer and Nancy, “I sure got a big freezer” Pelosi.

Who in their right mind would undo the highly successful immigration controls established under the previous administration and open up the southern border to every ignorant, diseased Juan, Jose’ and Miguel peasant from Central and South America and about 190 other nations on this earth, many of which would like to destroy our way of life and blow us up?  What Biden has done is not just grossly negligent.  It is criminal, if not treasonous. 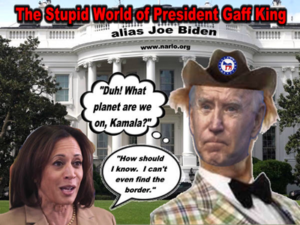 Anyone with half a brain knows that Joe Biden, by executive action, let the evil immigration genie out of the bottle and now, because of pride or politics or both, won’t or refuses to corral the genie and put her back in the bottle.  The rest of America must now pay for Joe’s lame brain politically driven stupidity and our culture will be forever altered from its constitutional foundation.  Meanwhile, illegal aliens are literally getting away with murder while the rest of legal Americans are slaves to the law and subject to ever-rising taxes to pay for it all.

What possible reason could there be to waive all or a portion of student loan debt, except to buy votes from ignorant Americans while responsible Americans paid or are paying off their debt?  On what planet do these nut cases live to think that providing free college tuition is a great idea other than to buy votes from prepubescent college kids and their parents?  That’s what Joe and his cadre of Democrat misfits want to do.

What motive must President Biden and the socialist Democrats have for burying the next several generations in un-payable debt with two trillion here and a couple of more trillion there?  To buy more votes of course.  However, virtually every economist will tell you, too many dollars in circulation can lead to run-away inflation where everyone, including the poor, pay the inflation tax in higher prices.  Why do we let these imbeciles anywhere near our money?

What evil occupies the minds of the inventors of Critical Race Theory, (CRT) a theory that is designed to tick off 70% of the population and divide us even more than we are divided now?  It’s diabolical!  Behind our backs CRT has found its way into all of our institutions, including our schools and colleges and even our military.  How did CRT get there?  A black college professor, lawyer and civil rights activist by the name of Derrick Bell, along with Allan Freeman and Richard Delgado, another professor-lawyer, came up with this theory in the 1970’s because they were obsessed with racial inequality.  So to correct racial inequality through CRT they pitted the white race against the black race in what can only be called nothing less than reverse racism.  Are they trying their best to start a civil war?

In New York state they are planning to use taxpayer money, $2 billion of it, to pay illegal aliens that lost their jobs during the pandemic at the rate of $15,600 per alien, illegal aliens that are being rewarded for braking our laws to get here.  Why aren’t legal, incensed Americans rushing the capitol of New York in Albany and tarring and feathering the stupid politicians who came up with this idea.  And it’s not just New York that came up with this vile boondoggle.  Joe and his merry band of socialist Democrat cutthroats wants to pay illegal aliens taxpayer dollars and free health care, along with granting them all amnesty.  Have Democrat politicians gone stark raving mad, or do they have a death wish?

But one of the worst Joe Biden insanities and obscenities is attempting to shut down fossil fuels and trying to replace them with intermittent, inefficient wind and solar power in the name of man-caused global warming.   First, it can’t be done without papering the entire continent with wind farms and solar arrays.  Second, such an attempt will drive the cost of energy up by several factors on those that can least afford it.  Third, the environmental damage and human rights abuses to obtain the raw materials for wind and solar far exceed their benefit.  (Read it all here at: “Climate”)

Approximately 80% of all American energy comes from fossil fuels.   It runs our cars, buses, trucks, trains and airplanes.  It heats our homes, it creates electricity for lighting, appliances and charging our electric vehicles.  It provides the raw materials for plastics, resins, synthetics and products for nylon stockings, paint, etc.  A modern society could not run without fossil fuels and not only would abandoning fossil fuels throw us back to pioneer days and outhouses, it would send the current American society into absolute chaos.  (Read “Back To The Future”)  And yet the deranged idiots that are now running this asylum believe we can somehow eliminate fossil fuels and still maintain our current standard of living.  Abandoning fossil fuels isn’t progress and it won’t solve climate change.  It is unnecessarily punitive on the general population and in fact it is grossly negligent if not just plain stupid.  Not only that, the reasons for doing so, are a fraud.

Now Joe and the gun-control nuts want to restrict the right of gun ownership even more by saying that “no amendment is absolute,” meaning the Second Amendment of course.  With a stroke of his pen, an offhanded remark and his utterance as his Holiness God, Joe and his socialist cohorts finally came clean about the intent of government to relieve you of those pesky Bill of Rights that get in the way of the government to govern and more particularly the Second Amendment.

If Joe was trying to invoke insurrection, he is getting mighty close.  If government keeps nipping away at the Second Amendment such that it no longer has any effect in law as a God-given right, can a revolution be just around the corner?  There are tens of millions of Americans who won’t give up their guns without a fight.  America isn’t Great Britain or Australia.  The Second Amendment is enshrined in the psyche’ of almost 100,000,000 patriotic Americans.   It WILL NOT be repealed in the hearts and minds of the American people because government says it is so.

But this alleged infrastructure bill requires a 60% majority vote.  To get around the 60% threshold, the socialist Democrats are seriously considering the repeal of the Senate filibuster rule, giving the Democrats the power to pass any socialist legislation they want by a simple majority.  They won’t ever need Republicans again to pass legislation as long as the Senate maintains at least a 50-50 split or better between Democrats and Republicans.

If you will remember, when the Democrats were in control of both houses and Obama was president, that is how we got Obama Care.  Not a single Republican voted for this nationalization of 20% of our economy and as the Republicans quickly found out, Obama Care can’t be repealed.  This 1,000-page law is now set in stone even though it was hopelessly flawed from the beginning.

There are many actions that Joe Biden and the Democrats have in-acted or are attempting to in-act, that are the antithesis of a free society and a Constitutional Republic.  Each one is designed to tear apart the fabric of liberty and force us all under the huge umbrella of unbridled, out-of-control government.  Each one has the specific, premeditated goal of reducing the entire population to nothing but serfs and slaves to an almighty, centralized government, the founding father’s worst nightmare. That is precisely because “the people manage to elect the dimmest Democrat politicians to public office who seem to be disconnected from reality, devoid of logic and reason and without a lick of common sense.”  Some Republicans fit that category as well.  Joe Biden is just one of those dim bulbs (and we do mean dim) that got elected by fraud, deceit and unconstitutional acts, aided and abetted by the corrupt news media and the hopelessly and even more corrupt social media.

Much of what Joe and the Democrats have done, can be undone by implementing “The Mandate.”  But that would require that millions of Americans get up off their dead butts and take up the fight against the evil that has overtaken our Republic.  We don’t have a lot of time to mess around.  “We Can’t Wait For The 2022 Mid Terms” to take action.

Ladies and gentlemen, if slow Joe is not just plain stupid, senile, or insane, that only leaves two other possibilities.  He must either be an out-and-out traitor, or an agent for one or more malicious foreign powers, or both.  He should be impeached and then tried for treason even if he is “just a doddering old fool.”

Read over 500 powerful conservative articles like this one HERE.

Click this link for the original source of this article.
Author: Ron Ewart