Biden Administration Lifts Restrictions On Abortion Pills Despite Risks, Allows Them To Be Delivered By Mail 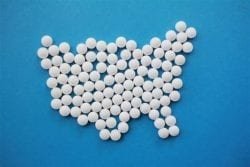 The FDA had approved the use of the abortion drug mifepristone, also called Mifeprex, in 2000 for up to 10 weeks’ gestation. But the FDA explicitly warned that buyers should not purchase Mifeprex over the Internet “because they will bypass important safeguards designed to protect their health.”

“The FDA’s intent to exercise enforcement discretion with respect to these requirements during the public health emergency is the result of a thorough scientific review by experts within FDA’s Center for Drug Evaluation and Research (CDER), who evaluated relevant information, including available clinical outcomes data and adverse event reports,” the FDA’s website said.

The FDA did not respond to requests for comment from the Daily Caller News Foundation.

Expanding access to abortion drugs by mail has been a major talking point for abortion advocates and media outlets during the pandemic.

Lifting the abortion drug restrictions means that “those in need of an abortion or miscarriage management will be able to do so safety and effectively by acquiring mifepristone though the mail — just as they would any other medication with a similarly strong safety profile,” ACOG Chief Executive Officer Maureen G. Phipps said Monday, Politico reported.

But pro-life advocates warned that lifting the drug restrictions not only endangers women and makes it more likely that abortions will increase.

March for Life President Jeanne Mancini cited FDA data from 2018 showing “thousands of adverse events caused by abortion pills” since 200, including hundreds of hospitalizations and 24 deaths.

“With this action, the Biden administration has made it clear that it will prioritize abortion over women’s safety,” Mancini said. “Allowing unsupervised chemical abortions via telemedicine, without requiring timely access to medical care, will put women in grave danger.”

What Happens During An At Home Abortion?

Planned Parenthood, which did not respond to requests for comment from the DCNF for this story, cites a number of possible but “really rare” complications that abortion drugs pose to women, including “blood clots in your uterus,” “bleeding too much or too long,” “infection,” “allergic reaction to one of the medicines,” “some of the pregnancy tissue is left in your uterus,” or “the abortion pills don’t work and the pregnancy doesn’t end.”

“First, you take a pill called mifepristone,” Planned Parenthood’s website said. “This medicine stops the pregnancy from growing. Some people feel nauseous or start bleeding after taking mifepristone, but it’s not common. Your doctor or nurse may also give you antibiotics to take to prevent infection.”

“The second medicine is called misoprostol,” the organization said. “You’ll either take the misoprostol right away, or up to 48 hours after you take the first pill — your doctor or nurse will let you know how and when to take it. This medicine causes cramping and bleeding to empty your uterus.”

Planned Parenthood said that the cramping and bleeding usually begins about 1-4 hours after taking misoprostol and usually lasts for several hours.

“It’s normal to see large blood clots (up to the size of a lemon) or clumps of tissue when this is happening,” Planned Parenthood said. “It’s kind of like having a really heavy, crampy period, and the process is very similar to an early miscarriage. (If you don’t have any bleeding within 24 hours after taking the second medicine, misoprostol, call your nurse or doctor.)”

Planned Parenthood notes that it is normal for women to have bleeding and spotting for a few weeks after the abortion.

Biden Administration Lifts Restrictions On Abortion Pills Despite Risks, Allows Them To Be Delivered By Mail is original content from Conservative Daily News – Where Americans go for news, current events and commentary they can trust – Conservative News Website for U.S. News, Political Cartoons and more.