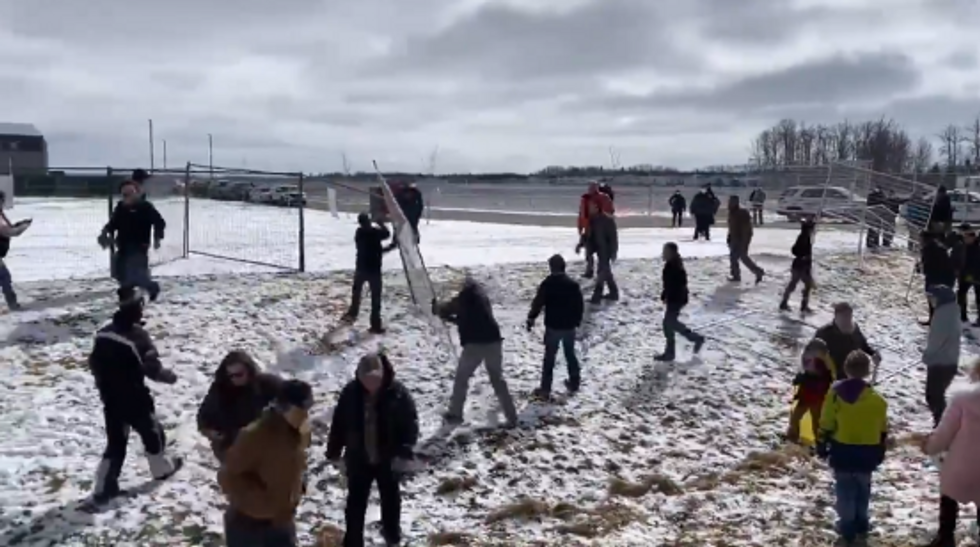 Hundreds of Canadian Christians gathered on Sunday at the GraceLife Church in Edmonton, Alberta. Government officials shut down the church for allegedly violating public COVID-19 health orders. Authorities erected a chain-link fence to prevent the house of worship from reopening last week. On Sunday, worshippers tore down the barricade, but were quickly met by a large contingent of riot police.

Alberta Health Services physically closed the GraceLife Church, preventing access to the building. AHS said the church would remain closed until the GraceLife Church “can demonstrate the ability to comply with Alberta’s chief medical officer of health’s restrictions.” The Royal Canadian Mounted Police even closed off the access roads in front of the church to the public.

Fences went up around GraceLife Church Wednesday morning as AHS physically closed the building west of Edmonton for… https://t.co/N0ZJuxSCeo

RCMP are controlling traffic at every entrance near GraceLife Church this morning. The north entrance is completely… https://t.co/wqT02v3F6W

Approximately 400 people gathered outside the church on Sunday, according to the Edmonton Journal. The Christians were not able to get inside the church, so they sang hymns and listened to Bible readings outside the building.

The crowd at GraceLife Church has nearly doubled in size in less than an hour. A new group walked up with music and… https://t.co/qHvtDwqHvP

A convoy of supporters drove from Calgary to Red Deer then onto Spruce Grove, AB this morning showing support for P… https://t.co/pppkrYbizo

A church in Edmonton, Canada wouldn’t obey politicians and lock its doors. So they jailed the pastor for 35 days. T… https://t.co/W3ADhbV08y

Farmer for Justice Jim Ness was at the GraceLife protest today.

Jim spent time in jail for his act of civil disob… https://t.co/tIs6DmD91j

The crowd began to sing along https://t.co/QIWd6plw7C

Some of the people outside of the building began to tear down the fence, despite pleas from the crowd to “leave the fence alone!”

Organizers say people not associated with the peaceful protest are trying to tear down the fences at GraceLife chur… https://t.co/dWssbJ9iby

The fence is coming down https://t.co/gFCroOuhin

There were reports of 200 police officers in riot gear sent to disperse the crowd outside of the GraceLife Church.

Just a regular Sunday at GraceLife Church, as the police head to Sunday Mass today.

This isn’t really about Covid, this is really about how the spirit of the age really wants to treat the church. https://t.co/na9xX2FBjB

The AHS claimed it had received 105 complaints from the public about the GraceLife Church between July 10 and April 6. The church was shut down in January for breaching public health guidelines that limit worship services to 15% of capacity. The church was also accused of not ensuring that people wore face masks during religious services and for not practicing proper physical distancing.

In February, GraceLife’s Pastor James Coates was charged violating COVID-19 public health orders. Coates spent 35 days in custody before pleading guilty to a charge of breaching bail and was fined $1,500. He returned to the pulpit on March 28.

“I’m very disappointed to see this kind of draconian and aggressive enforcement of health orders when these health orders themselves are being challenged in court,” Carpay told CBC News. “It shows a very aggressive government that is not answering questions about its policies, but wants to push its weight around and try and make an example out of GraceLife Church.”