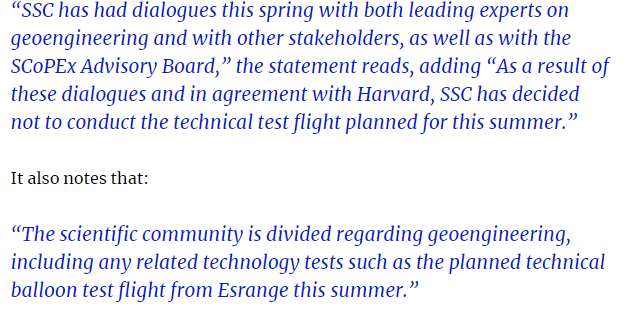 Sweden’s space agency has called off a geo-engineering experiment to determine whether blotting out the sun with aerosols could reverse global warming. Funded by billionaire Bill Gates, the project stoked fierce opposition from eco groups.

The Sun-dimming technology would potentially reflect sunlight out of Earth’s atmosphere, triggering a global cooling effect.  The Stratospheric Controlled Perturbation Experiment (SCoPEx), launched by Harvard University scientists, aims to examine this solution by spraying non-toxic calcium carbonate (CaCO3) dust into the atmosphere from a high-altitude balloon to study its effects on sunlight reaching Earth.  The project however, proved too controversial, the Swedish Space Corporation (SSC) said that a test flight set for June would not move forward.

David Keith, a professor of applied physics and public policy at Harvard University, recognizes the “very many real concerns” of geoengineering. It is true that no one knows what will happen until the CaCO3 is released and then studied afterward.  He had proposed the creation of a “risk pool” to compensate smaller nations for collateral damage caused by such tests, but such a pay-out might be little comfort to those displaced by unliveable conditions.

There is concern in the scientific community that putting reflective aerosols in the atmosphere could worsen droughts and hurricanes in some regions if geoengineering isn’t regulated.  (The effectiveness of regulators is open to question – regulatory/corporate capture is a mighty beast).

Widespread research into the efficacy of solar geoengineering has been stalled for years due to controversy. Opponents believe such science comes with unpredictable risks, including extreme shifts in weather patterns.

The US, Brazil, and Saudi Arabia blocked a 2019 United Nations assessment of global geoengineering plans.  International cooperation will be required to assess the risks, winners, and losers of any such experiment.

At a 2010 TED talk about “emergency measures” Gates suggested mankind could implement solar geoengineering as an “insurance policy” to fight climate change should all else fail.

Another interesting “insurance policy” Gates has helped fund is The Doomsday Vault which lies deep in the bowels of an icy mountain on an island above the Arctic Circle between Norway and the North Pole which holds a resource of vital importance for the future of humankind – a reserve of seeds for use in case of an apocalyptic event or a global catastrophe – (“a fall out from Solar Engineering experimentation perhaps?”). 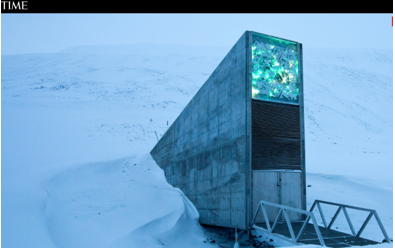 It would appear there are lots of “experiments” being undertaken with Bill Gates funding, in so many areas, should anything go wrong it will be viewed merely as collateral damage, a small price to pay for “the greater good” and of course bunkers and vaults have been built to protect those worthy of survival should a global catastrophe occur.

For now, thank God Sweden have put the brakes on “potentially catastrophic” man made meddling with mother nature – but the question is for how long?

I fell into politics quite by accident in 2014 and all because my local County Council brought in a policy switching off street lighting overnight my elderly neighbours felt vulnerable – this spurred me into action and the Right to Light Campaign was born.

I started the Right to Light Petition which garnered over 11,000 signatures enough to trigger a debate at Kent County Council.  I delivered a speech in front of 88 Councillors and journalists but they refused to listen to the people and kept the lights off.

I worked closely with a local journalist who followed the campaign from start to finish, publishing articles on an almost weekly basis.

Word spread about the campaign and the Council’s refusal to listen – my phone became a hotline, I was invited onto BBC Breakfast and live radio something I would never have contemplated happening in a million years.  Following a fierce 2 year battle and against all the odds streetlighting was restored throughout Kent.

Spurred on by success and having witnessed how badly represented people were at local level I joined UKIP standing as a candidate in Borough and County elections narrowly missing out on a seat by 22 votes on one occasion.

The run-up to the EU Referendum was an exciting time I joined the Grassroots Out Campaign and ran weekly street stalls delivering thousands of leaflets and meeting hundreds of people including Nigel Farage and Gerard Batten.  I loved the buzz and the fun was infectious.  I have been hooked ever since.

I became a prolific poster on Facebook building up relationships in many groups, I was approached by the owner of a Website/FB page called Fortis est Veritas asking if I would like to write articles to post on his platform.  I have to date written 22 articles and really enjoy documenting the twists and turns of Brexit a very exciting time – we are writing history and it is essential that is fully documented.

I am very excited to now be given the opportunity to join the UNN family as a Political Analyst – the next chapter in a very exciting 5 years of my life.