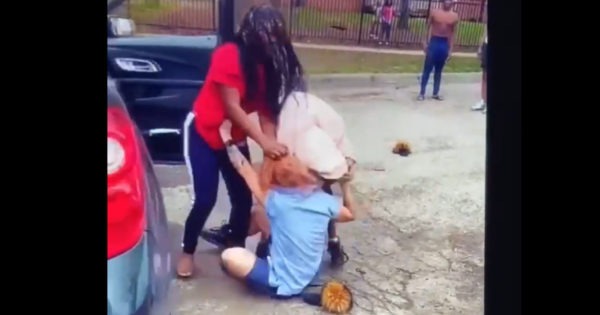 The footage was posted to Facebook on Thursday with the caption, “The Crime in Flint is out of control…..A United States Postal Worker was attacked in broad daylight …..Where is The Public Safety Plan……

In the video, two black females can be seen grabbing the hair of the postal worker while she is in the ground, and repeatedly punching her in the face.

The attack goes on for nearly a minute before the assailants flee in a grey-colored vehicle.

The postal has reportedly recovered from the attack, and one woman has been arrested in connection to the crime according to the New York Post.

Reports indicate the attackers may have been seeking to steal stimulus checks from the postal service truck, which is supported by the cameraman’s statement that “they done hit this mail lady’s car and hopped out.”

While left-wing policy activists have stressed the importance of getting stimulus checks into the hands of low-income and “marginalized’ people, President Joe Biden chose to exclude over 12 million Americans from the stimulus and refused to answer direct questions about this move:

President Joe Biden appeared flustered by a question about his administration’s decision to severely restrict the viability requirements for receiving a $1,400 direct stimulus payment on Wednesday, refusing to answer the question and ending the question and answer session early.

“Are you comfortable having to limit the direct payments?” Biden was asked.

“Yes,” he responded in the affirmative.

Biden was then asked, “What do you say to the 12 million Americans who won’t receive checks anymore?”

The visibly flustered President raised his hand as if preparing a response, then shook his head. “Sorry I couldn’t hear, thank you all for coming.”