Around two thousand citizens of Serbia took to the streets of Belgrade on April 8 to protest a new tax scheme that would require digital workers – or those who work as freelancers over the internet – to pay exorbitant retroactive taxes for the previous five years. They warn that if the government goes through with its plan, over 100,000 individuals now taxable will slip over the edge of poverty.

The protesters, many coming from other cities across Serbia, set up a camp of tents in front of the parliament during the evening of April 7. The next morning, campers were joined by protesters in a 2-hour walk on the main Belgrade streets, stopping by government buildings to “greet” ministers of finance and labour, and the premier. They finished their walk with a promise to return in two weeks if the Serbian Parliament passes the law they strongly object to.

The protests are organized by the Association of Internet Workers, or Udruženje radnika na internetu, an organization formed through a Facebook group with over 13 thousand members. Besides expressing their rejection to the new taxes, the protests were to debunk the government’s claim that these taxes have the support of freelancers.

On March 29, the Association held its third round of negotiations with the government, and like previous attempts in February, talks failed as the government refused to change most of their terms.

To add insult to injury, the government announced on March 31 that they have come to terms with another organization that claims to represent the freelancers. This came as a bit of a shock to the digital community, since the organization in question was never part of the negotiation process nor organized any activities towards finding a solution for digital workers, but rather kept silent over the past six months, or voiced out their support to Association of Internet Workers demands. 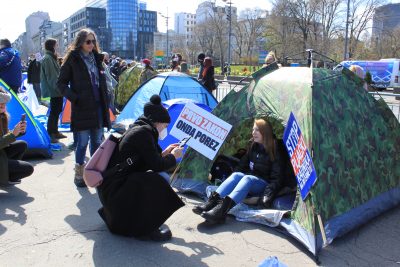 “No taxation without legislation.” Protesters camping in front of Parliament of Republic of Serbia, April 8, 2021. Photo by Association of Internet Workers, used with permission.

The Serbian Prime Minister Ana Brnabić visited the camp before the April 8 protest started, offering “a cup of tea” to the campers who spent the night in freezing weather. They responded that they want new negotiations and a halt to the parliament’s procedures of adopting a new tax law.

For years, digital workers have been excluded from laws and regulations in Serbia. They have had no right to pension plans nor healthcare, and no way of defining their employment status legally.

They were only mentioned in an amendment made to the Pension and Disability Law in December 2019, that allowed them to add part of the income to their personal pension funds starting 2020, and then only if they were officially employed elsewhere. In the years before October 2020, upon inquiry, the Serbian tax authorities claimed that the line of work of people who earn their living by outsourcing services to foreign employers was not regulated by law, and that they had no framework for taxation.

As freelancer and activist Miran Pogačar explained the situation in an interview with People’s Dispatch:

Even though Serbia ranks fourth in Europe based on its market share in the global digital workforce, for years, digital workers in 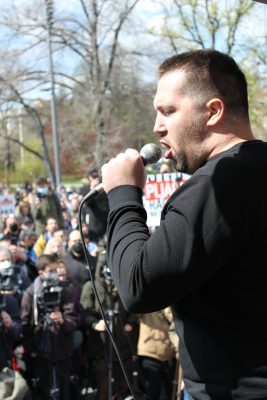 Miran Pogačar speaking at April 8 protest of freelancers in Belgrade, Serbia. Photo by Association of Internet Workers, used with permission.

Serbia were invisible when it came to laws and regulations. They had no right to a pension or healthcare, and no way of defining their employment status legally.

As the unemployment rates in Serbia are sky-high, the National Unemployment Office even recommended finding work with foreign companies. It even subsidized courses for digital workers without mentioning any obligations that come with freelance work.

At the same time, Serbian tax authorities had been misinforming citizens who inquired about their tax obligations. They claimed that our line of work wasn’t regulated by law, that they had no framework for taxation, and they sent out the same message: we weren’t supposed to pay anything, and we couldn’t if we wanted to.

However, in the year of the pandemic and the devastating economic crisis, instead of amending the labour law and regulating Internet and freelance work, the authorities exploited an obscure legal loophole in the 2001 Personal Income Taxation Law, enabling them to initiate a sudden tax revision.

Subsequently, on October 13, 2020, the Tax Administration demanded that all private individuals who had received money from abroad pay their taxes and social contributions for the preceding 6 years in a single installment, including accrued interest.

This was the first time the Tax Administration had ever informed or warned digital workers of their alleged obligations, and did so through a Facebook post calling them to “declare income from abroad at their own initiative.” According to the Tax Administration’s data, 99.7% of all those affected by the 2001 law had not paid taxes or contributions. Abruptly, the authorities demanded a payment of taxes and contributions in the future and retroactively for the last five years. 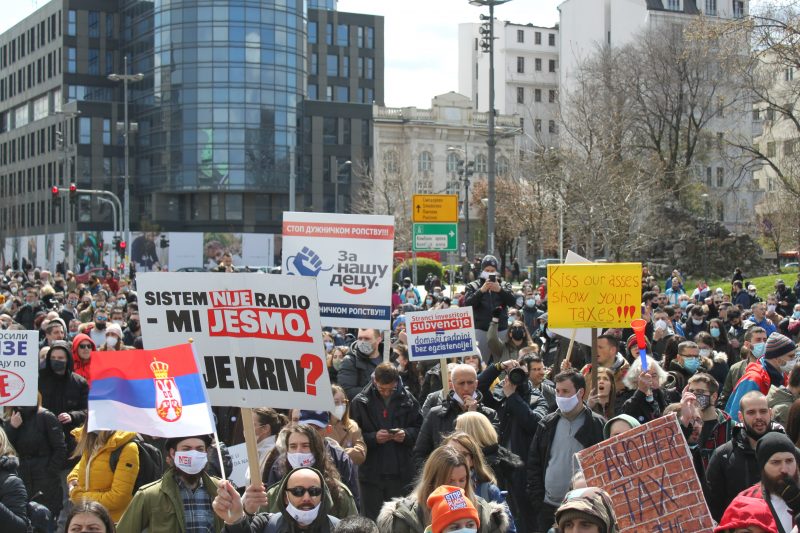 “The system didn’t work, but we did. Who’s to blame?” banner at April 8 protest of freelancers in Belgrade, Serbia. Photo by Association of Internet Workers, used with permission.

After the first protest, the President of Serbia Aleksandar Vučić issued a conciliatory statement, saying that while everyone should pay taxes, the state authorities were indeed partially to blame and that he asked the government not to request payment for that period.

I think that those people should be allowed to work. Since now it’s clear what kind of tax they should pay, please don’t charge them retroactively.

After the second protest, the government then accepted the freelancers’ offer to negotiate. The authorities proposed an interest write-off, and a reduction of the taxable sum to 57% of the total, although the latter was not guaranteed. The government also proposed a ten-year payment plan.

The freelancers estimated that combined with current taxes and contributions, the monthly sum would amount to over 50% of an individual’s total income, provided that their income remains constant for the next ten years.

Due to the volatile and precarious nature of their work, this would push many of the  digital workers into extreme poverty. In case a single income is late, it could result in whole families becoming homeless. Moreover, they claim the government’s offer is unconstitutional, violating Article 91, Section 3 of Serbian Constitution which states that the obligation of paying taxes and other dues shall be general and based on the economic ability of taxpayers.

The freelancers unanimously agree that taxes must be paid. However, they consider the current rates are not only unjust but downright oppressive and unsustainable. The state is demanding that they pay for social benefits while denying them the means to exercise them. 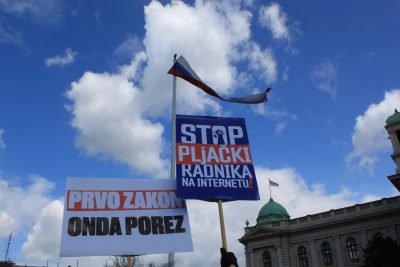 “No taxation without legislation,” and “Stop the robbery of internet workers” banners from April 8, 2021 protest in Belgrade. Photo by Association of Internet Workers, used with permission.

The digital workers also find it unjust to impose taxation retroactively, because the market price of their work could not be adjusted in that period to include even possible taxation. Using digital tools and surveys, freelancers came to a joint decision that they can’t accept the government’s proposal.

The association is a growing group of mostly young people that includes designers, teachers, translators, media specialists, programmers, and content creators (among others), who use protests and social-media campaigns to fight their way through the government-controlled media where they were essentially portrayed as tax-evading criminals.

By using the internet, and by talking to relatives and friends, the freelancers managed to reshape public opinion about their situation in less than two months, and largely gained the sympathy and understanding of the general public. Nevertheless, Serbian authorities still refused to take into consideration the evident humanitarian issue at hand. 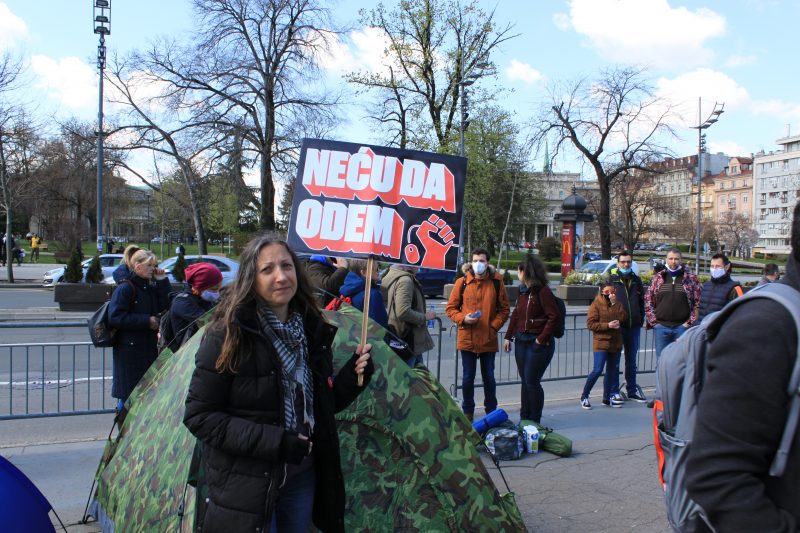 “I don’t want to leave [my homeland]!” protester holding a banner in front of Serbian parliament. Photo by Association of Internet Workers. Ued with permission.

Freelancers vow to continue protesting until a just solution is reached. They reiterate that they would be willing to pay taxes, but not in a way that would plunge them and their families into poverty, or rob them of over half of their projected income for the next decade.

Since the prime minister refused the protesters’ demands, they decided to continue camping until April 10 and join in solidarity a protest by environmental activists scheduled for Saturday.

The author is a member of the Association of Internet Workers. She is a journalist and activist from Belgrade, Serbia.

Top image: Protest of freelancers in Belgrade, April 8, 2021. Banners read “We refuse to relinquish our future!” and “Yes to Taxation ! No to Robbery!” Photo by Association of Internet Workers, used with permission.