Bill Hwang, the founder of the hedge fund Archegos that just lost $30 billion, probably didn’t realise when he named his company that it was predestined for big things.

Archegos is a Greek word which means leader or one who leads so that others may follow.

ARCHEGOS THE FIRST OF MANY TO COME

This, until a few days ago, unknown hedge fund is a trailblazer for what will happen to the $1.5+ quadrillion derivatives market. I have warned about the derivatives bubble for years. Archegos has just lit the fuse and soon this whole market will explode.

I know that technically Archegos was a Family Office for favourable regulatory reasons. But for all intents and purposes I consider it a hedge fund.

Greedy bankers have now built derivatives to a self-destructive nuclear weapon. Archegos shows the world that an unknown smaller hedge fund can get credit lines of $30 billion or more that quickly leads to contagion and uncontrollable losses.

And when the hedge fund’s bets go wrong, not only do the investors lose all their money, also the banks which have recklessly financed Archegos’ massively leveraged speculation will lose around $10 billion of their shareholders’ funds.

It obviously will not affect the bankers’ bonuses which will only be reduced when the bank  has gone bust. Remember the Lehman crisis in 2008. Without a massive rescue package by central banks, Morgan Stanley, Goldman Sachs, JP Morgan etc would have gone under. And still the bonuses that year in these banks were the same as the previous year.

Absolutely scandalous and the very worst side of capitalism. But as Gordon Gekko said in the film Wall Street – Greed is Good! Well when it all finishes, it might not be as good as they think.

DERIVATIVES – A MONEY SPINNER THAT WILL SPIN OUT OF CONTROL

Derivatives have been a money spinner for the major investment banks for decades. Today virtually all trading is in the form of derivatives. Very few portfolios are in the underlying instruments. Instead, anything from stock portfolios, ETFs, gold funds etc use derivatives or synthetic instruments. In addition the interest and forex markets are all derivatives. Archegos’ portfolio for example was in Total Return Swaps.

As we just saw, when derivatives implode, and the underlying securities are dumped by the prime broker at any price, the losses are instantaneous and irreparable.

Still, contagion was avoided this time with the banks taking all the losses. But that will not be the case next time when not just $30 billion of derivatives implode but multiples of that sum.

WHEN COUNTERPARTIES FAIL……… THE $1.5 QUADRILLION TIMEBOMB

Defenders of derivatives which obviously includes all the investment banks and the BIS (Bank of International Settlement) in Basel, will argue that the net derivatives position is just a fraction of the gross which is estimated to be at least $1.5 quadrillion.

Yes, of course the net position theoretically is much smaller after netting. But when counterparties fail, gross remains gross. And this is what we are likely to see within the next few years.

Archegos is a very good example of what the world will experience on a much bigger scale – $1.5 quadrillion will not disappear quietly. The banks managed to stop contagion this time but they won’t once it starts in earnest.

The cube below represents all the known derivatives in the world of $1.5 quadrillion. The real number is probably considerably higher.

The $1.5Q is 850X declared central bank gold. What will the gold price be after the derivatives implode? Probably too high to fathom! 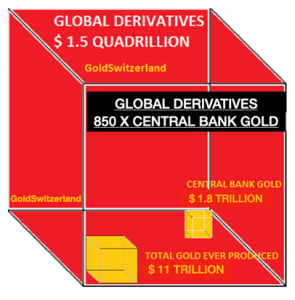 When the biggest financial bubble in history unravels the massively over-leveraged financial system, led by the implosions of the $1.5 quadrillion derivatives monster, will be paralysed as stock, bond and property values just evaporate in a cloud of smoke.

The world will then realise that all the printed money and all credit which backed these assets had ZERO value which some of us have been clear about for years.

Despite the pipe dreams of the Keynesians and the MMT rubbish theories, money created out of thin air must always have ZERO value.

And when the world discovers that the debt has ZERO value, they will wake up from their sweet dreams and realise that the artificial wealth they have built up was all based on a lie.

Starting with the closing of the gold window in 1971, the world has built up an edifice of grossly overvalued assets that will soon find their intrinsic value of nearer ZERO.

Many will argue that many of these assets will still have a value whether it is a sound business or a high quality commercial building with good tenants.

That argument is valid as long as the business has no debt and/or can service its debts from revenue.

Same with leveraged commercial property. Bricks and mortar have little value if it is not income producing. When tenants can’t pay the rent, the bank will call in the loans and foreclose on the building.

In a world with $300 trillion of debt, most assets are heavily leveraged. Debtors with no profits or income will quickly become insolvent and the bank will become holders of major assets that collapse in value. The banks cannot afford to hold on to these assets and will sell them in ongoing fire sales.

Very few people will have liquid and marketable assets at that point. And the debt financing will become non-existent.

HOLDERS OF REAL MONEY OR GOLD & SILVER WILL FIND BARGAINS

As in every period of crisis in history holders of liquid real assets like gold and silver will be able to pick assets for 5 cents on the dollar. This sounds impossible today but people familiar with for example the Weimar Republic will know that this actually happened then and also in other times in periods of major crises.

That will be the time when a property that is today worth say $1.1 million or 20 kilos of gold can be acquired for $1 kilo which is a 95% discount, measured in gold.

This obviously sounds totally unrealistic today but history proves that it happens time and time again.

FIRST TIME IN HISTORY A DEBT COLLAPSE IS GLOBAL

This time the debt bubble is bigger than any time in history. But not only that, this is the first time ever that a debt collapse is global.

Every corner of the world is in the same situation – North America, South America, Europe, Africa, China, Japan and even Russia. Some countries like China might be able to deal with their debt internally but every single country in the world will suffer as the financial system implodes and world trade collapses.

The biggest economic collapse in history so far is probably the fall of the Roman Empire which happened gradually but the final fall of Rome was in 476 AD when the Germanic leader Odoacer disposed of Romulus Augustulus. From then on no Roman emperor would ever rule from Rome.

The late 5th century is considered the start of the Dark Ages that lasted 900 years until the Renaissance or late 14th century. Other historians define it as a 500 year period. The Dark Ages was a period of cultural and economic decline. But there was clearly not a 900 year solid decline. Many areas prospered much earlier.

So whether we will get an extended period of decline after the current economic and financial bubbles, only future historians will know. What is certain though is that a debt and asset implosion of the magnitude that the world is now facing will have devastating effects for our children and grandchildren. But whether it will last 50 years or 500 years, only history will tell us.

The post Archegos & Credit Suisse – Tip of the Iceberg appeared first on LewRockwell.

Click this link for the original source of this article.
Author: Egon von Greyerz

In other news...
WATCH: Tucker Guest RIPS INTO AOC
Failed Dem Mayoral Candidate Charged in Fraud Case,...
Fox News Under Fire As Mike Lindell Hires Investiga...
Time to Ask Yourself: Is My Church Being SEDUCED by...
At Townhall: Biden’s Many False Claims on Gun Viole...
After seeing woman stabbed repeatedly, group of goo...
0 Comments
Inline Feedbacks
View all comments