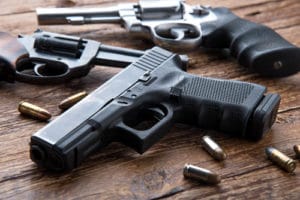 ROCKFORD — A Rockford man was sentenced Wednesday by U.S. District Judge John Z. Lee to nine years in federal prison for drug trafficking and illegally possessing a firearm as a convicted felon.

BRIAN KOTLIENTHONG, 33, pleaded guilty to the charges on Aug. 13, 2020.  According to a written plea agreement, Kotlienthong distributed a total of approximately 83.6 grams of cocaine to an individual in Rockford in December 2017.  Kotlienthong, who had previously been convicted of a felony and was prohibited from possessing a firearm, admitted that on Feb. 8, 2018, he illegally possessed a 9mm rifle and sold it to an individual.  Kotlienthong also admitted in the plea agreement that on Dec. 21, 2017, he possessed and sold a 9mm pistol and approximately 27.6 grams of cocaine, and on March 26, 2018, he possessed and sold another 9mm pistol while showing approximately one pound of marijuana that he offered to sell.

The sentencing was announced by John R. Lausch, Jr., United States Attorney for the Northern District of Illinois; and Kristen deTineo, Special Agent-in-Charge of the Chicago Field Division of the U.S. Bureau of Alcohol, Tobacco, Firearms & Explosives. The investigation was conducted by ATF and the Stateline Area Narcotics Team, which includes law enforcement officers and agents from the Illinois State Police and Ogle County Sheriff’s Office.  The government was represented by Assistant U.S. Attorney Talia Bucci.

Click this link for the original source of this article.
Author: Savion Buehler

This content is courtesy of, and owned and copyrighted by, https://chicagomorningstar.com and its author. This content is made available by use of the public RSS feed offered by the host site and is used for educational purposes only. If you are the author or represent the host site and would like this content removed now and in the future, please contact USSANews.com using the email address in the Contact page found in the website menu.